TRENTON, N.J., Dec. 15, 2020 /PRNewswire/ -- If you can't beat them, join them? Well sort of.  New Jersey's most vocal adversary of the state's new legislation, which legalizes 'regulated cannabis' while still criminalizing marijuana, has found a clause for inclusion.  Ed "NJWeedman" Forchion has announced a NJ/NYE Constitutional Amendment to Legalize Marijuana Virtual Smoke Out to be held at his NJWeedman's Joint on December 31, 2020.  The New Year's Eve 'joint' jam will celebrate the official opening of his Citizen's Dispensary on January 1, 2021 at his storefront location, directly across the street from Trenton City Hall.  Pot, as cannabis is affectionately called by longtime supporters, officially becomes legal on January 1, 2021 in New Jersey, and with no set guidelines in place for implementation, Forchion is looking to plant his seeds firmly in the Garden State's new legalization soil. 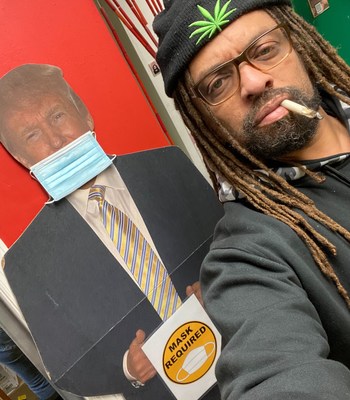 The NJ/NYE Constitutional Amendment to Legalize Marijuana Virtual Smoke Out will take place outdoors at NJWeedman's Joint at 322 E. State St. in Trenton. The live event will be limited in capacity due to Covid restrictions, but will stream online for free across several social media platforms, including IGTV at @njweedman and IGTV at @njweedmans_joint.  Forchion is inviting lovers of all-inclusive legalization to light it up with him as they bring in the New Year in high celebration!

Forchion is accusing the state of bait and switch laws which in his opinion led New Jersey citizens into voting for the legalization of a corporate, Caucasian run cannabis industry, under the guise of legalizing marijuana. Forchion notes that under the current developing legislation, marijuana will still be illegal and in fact, criminalized, in underserved communities.

Forchion, who once owned and operated the Liberty Bell Temple, a popular marijuana dispensary in Los Angeles on Hollywood Blvd., has been a pioneer of legalization for three decades now. In addition to serving almost 1200 days in jail for his advocacy, he once held legendary smoke out celebrations at numerous mansions throughout the Hollywood Hills between the years of 2009 and 2011.

"As an activist, I feel like I have come full circle now," cites Forchion.  "What I have been shouting about for decades, been terrorized by the police, prosecutors and the Drug Enforcement Administration (DEA) for, and prosecuted by the law for, has now come to fruition.  Marijuana is being recognized as legal around the country.  But now, guys like me who paved this path are being cut of the business. Legalization in New Jersey doesn't include felons like me. Black market dealers like me will still be criminalized while a new corporate culture capitalizes on the sale of cannabis.  We got jail cells while they come in and get to sell!"

"So, on January 1, 2021 I am officially setting up shop," adds Forchion. "Senator Nicholas Scutari, the chief sponsor of the Senate bill to legalize recreational marijuana in New Jersey, has stated that marijuana could be legal Jan. 1 with no rules in place.  The Senate is slated to vote on December 17, 2020, but for full passage of any legislation, the process is lengthy, more involved and unlikely to occur over the holidays. In fact, Senator Ronald L. Rice, has gone on pubic record stating his discord with the stance of the current legislation and vowing to stand with marginalized communities in solidarity and voting against the current measures.  The bottom line for me is that vendors like me have been servicing marijuana users for decades and we don't plan to stop now. I consider my time served in prison my licensing fee to participate in the marijuana marketplace and I refuse to get off the cannaBus!"

Join Ed "NJWeedman" Forchion as he continues to engage in civil disobedience, campaigning for the underserved and marginalized sectors of the cannabis community.  Show your virtual support and light up the New Year with him during the NJ/NYE Constitutional Amendment to Legalize Marijuana Virtual Smoke Out.  To participate in person, go to Eventbrite at https://www.eventbrite.com/e/420-new-years-eveconstitutional-amendment-celebration-tickets-132884417871 (tickets limited due to Covid restrictions.)  To party on online, go to Instagram Live on December 31, 2020 at 9:00 p.m. ET at @njweedman and @njweedmans_joint and the NewJersyWeedman YouTube channel at https://www.youtube.com/user/NewJerseyWEEDMAN.