ARLINGTON, Va., Dec. 4, 2020 /PRNewswire/ -- In a white paper released today, The Amistad Project of the non-partisan Thomas More Society is arguing that the current Electoral College deadlines are both arbitrary and a direct impediment to states' obligations to investigate disputed elections. 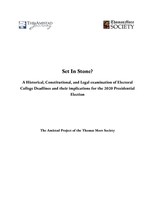 The authoritative research paper breaks down the history of Electoral College deadlines and makes clear that this election's December 8 and December 14 deadlines for the selection of Electors, the assembly of the Electoral College, and the tallying of its votes, respectively, are not only elements of of a 72-year old federal statute with zero Constitutional basis, but are also actively preventing the states from fulfilling their constitutional ? and ethical ? obligation to hold free and fair elections. Experts believe that the primary basis for these dates was to provide enough time to affect the presidential transition of power, a concern which is fully obsolete in the age of internet and air travel.

The white paper also shows that the December 8 "safe harbor" deadline for appointing presidential Electors does not apply to states where flagrant violations of state election laws affected the outcome of the popular vote. In fact, the only Constitutionally-set date in the election process is the assumption of office by the President on January 20.

The Amistad Project has filed litigation in several key swing states arguing that illegal conduct by state and local officials led to more than 1.2 million potentially fraudulent ballots, including illegal votes that were counted and legal votes that were not counted. In each state, the number of potentially fraudulent ballots far exceeds the margin separating the leading presidential candidate.

"Through rigorous investigations supporting our litigation, we demonstrate that state and local officials brazenly violated election laws in several swing states in order to advance a partisan political agenda," said Phill Kline, Director of The Amistad Project. "As a result, it is impossible for those states to determine their presidential Electors in line with the arbitrary deadline set forth via federal statute in 1948, and thus, the only deadline that matters is January 20, 2021."

Although federal law sets December 8, 2020 as the date on which determinations of Electors made pursuant to state election law automatically become official, the law does not require Electors to be designated by that date in order to be counted. Because the U.S. Constitution places ultimate authority for designating presidential Electors in the hands of state legislatures, it is the responsibility of the people's elected representatives to judge the relevant facts and appoint an appropriate slate of Electors, subject only to the sole deadline set forth in the U.S. Constitution ? 12:00 noon on January 20, 2021.