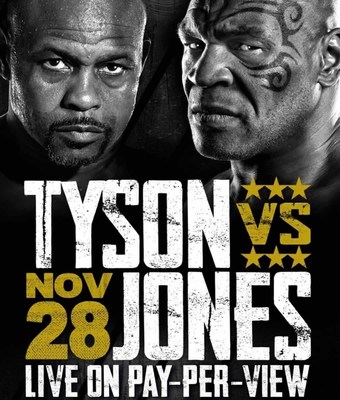 Former 'Pound 4 Pound King' Roy Jones Jr. will fight the "Baddest Man on the Planet" Mike Tyson on 28th November 2020. The fight announcement of the former two heavyweight champions created a global hype behind this 'clash of the titans'.

UK-based SPARBAR®-brand founder Jasvinder "Jazz" Gill: "We are proud for our valued Athlete Advisory Committee member Roy Jones Jr. to break the pay-per-view records. Congratulations from all of the SPARBAR® team, we're behind him as one of our SPARBAR® legends."

In March 2020, Jonesjoined the SPARBAR ® team as Head the Board of Athletic Advisors, announcing "I love working out with SPARBAR®!" See him training on the SPARBAR® Pro sparring partner here:https://www.instagram.com/p/BjfpUvfHzka/.

In fact, Jones remained active all the way to the age of 49, participating in at least one professional fight in every calendar year of his run until 2018.

"This is the era of the legends. We're thrilled to be thrown back into the 80s and 90s boxing hype," says Mr. Jazz Gill, adding "The fight never happened when they were in their prime. So it is a highly intriguing match up as these titans of boxing collide to make boxing history."

Roy Jones Jr. (51) left his mark most indelibly in boxing's history when he won the WBA Heavyweight World Title, becoming the first former middleweight champion to win a heavyweight title in 106 years.

Mike Tyson (54) nicknamed "Iron Mike" and "The Baddest Man on the Planet", holds the record as the youngest boxer to win a heavyweight title.

A global sports fitness brand, SPARBAR® is proud of its position as the inventors of the global combat sensation that known the world over as SPARBAR® Pro sparring partner. Founded in 2013 and backed by over 20 years of real boxing experience, we have single-handedly changed the fight game with our innovative concept of training without a sparring partner.

Used by world champions, international celebrities, world-leading gyms and with over 300M+ social media video views, the SPARBAR® success ensures that we are not just pioneers, but game-changers in the combat sports training equipment market. SPARBAR ® is the key to learning core fundamental boxing skills and developing hand-eye coordination as you build footwork, balance, speed, stamina, accuracy and power, simulating realistic sparring in a safe environment.

Genuine SPARBAR® products are available both online and in retail stores worldwide. Go to sparbar.com to purchase your new SPARBAR® equipment or to find a retailer near you.