LAUSANNE, Switzerland, Nov. 27, 2020 /PRNewswire/ -- Professor Wilhelm J. Ansorge, after a long scientific career at top laboratories (Texas Instruments, CERN, and EMBL), is now a visiting scientist in several European Institutes, serving on Scientific Advisory Boards, and evaluating scientific projects. Throughout his career, Ansorge has developed novel scientific instrumentation and software, which has led to progress in analyzing genomes, genes, and proteins in cellular and molecular biology. His laboratory made multidisciplinary advances of automated technology and techniques in various fields and their applications in Genomics, Biology, and Medical fields. In the 1980-90s period, Ansorge has been the world leader in the development of Automated DNA Sequencing Techniques and Analysis of genomes, Automated Microinjection in Living Cells and Visualization of cellular processes, DNA Microarrays (with first complete Human Genome Array, International standard protocol for microarrays MIAME), Fast Screening of Monoclonal Antibodies, and Electro-transfection of cells. 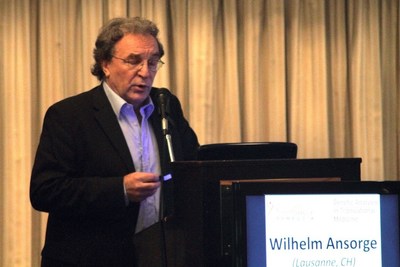 DNA sequencing is when nucleic bases (Adenine, Guanine, Cytosine, and Thymine) within a DNA chain are determined. Being a key task in molecular biology, genomics, and medicine. In recent years, advances in technology have made it possible to more economically and rapidly sequence huge amounts of genetic material, opening up unprecedented research and diagnosis opportunities.

Most current sequencing machines give excellent results but are limited to sequencing short segments of DNA, so to sequence an entire genome, it is necessary to divide it into fragments, sequence, and assemble them, using sophisticated software with high temporal and spatial complexity. Even when they have support for execution in multiple cores and multiple processors, these programs cannot compete with the speed of modern sequencing machines, representing the bottleneck of the analysis process. Although reliable in quantitation of gene expression, short reads can still have problems with resolving some genome structural features, like gene copy number variations and long multiple repeats.

Ansorge presented in 1991 a gel-free DNA sequencing system and the DNA chips. He strived to develop automated techniques with long sequence reads, ideally whole chromosomes, reducing the mapping and assembly workload by his pair-end sequencing. Some recent DNA sequencing techniques on the market allow determining long reads (many thousands of bases, although with somewhat higher error rate), lowering the requirements on computer systems and running time for fragment assembly. The freed computer capacity could be used for the much-needed functional analysis of the huge genomic data.

DNA sequencing has a long and versatile list of applications, being a key technology in the research of some types of cancer, genetic diseases, as well as HIV, it also helps to increase the basic knowledge of organisms and cells, patient diagnosis, research to the drug resistance, or predisposition to the disease.

Genetic testing of inherited disorders, with widely discussed potential benefits and risks, is becoming a reality, with millions of babies tested each year.

Vaccine quality control by nucleic acid screening helps determine why some people have different side effects and immune responses. Screening can detect both active as well as any latent viruses from their mRNA.

DNA sequencing is an active research area, profiting from advances in biochemical, hardware, and software fields. Today pharmacogenomics and pharmacotherapy have great potential to benefit from genomic testing. Evaluating the influence of diet, state of health, and environment, e.g., on the response to administered medicines, will lead to personalized medicine in the near future.