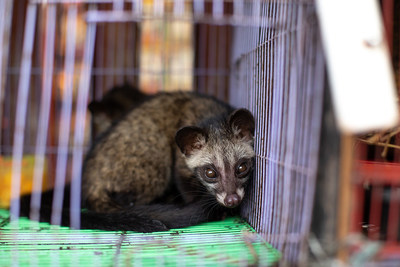 Over 50,000 Canadians have signed a petition asking Canada to support the closure of wildlife markets and commit to stopping the global commercial wildlife trade. They are part of a growing movement of more than a million people worldwide who support global charity World Animal Protection's campaign urging G20 leaders to take action at the G20 Leaders' Summit this weekend, virtually hosted by Saudi Arabia.

It is widely acknowledged that wildlife markets played a significant role in the outbreaks of both COVID-19 and SARS. Research shows the risk of zoonotic diseases increases when animals are stressed, kept in crowded, unsanitary conditions and traded up the supply chain. The charity is warning governments that the coronavirus has been spreading across mink farms in Europe and the US, forcing authorities to cull millions of infected animals.

With just under 100 mink farms in Canada, there are concerns it could happen here next and World Animal Protection is calling on the government to take a One Health preventative approach which means prioritizing the welfare and health of humans, animals and the planet.

"The commercial wildlife trade is putting our health, the economy and biodiversity at risk and Canada fuels the demand and supply of wild animals and products made from them," says Melissa Matlow, Campaign Director for World Animal Protection. "We're calling on Canada and other G20 countries to curb the global wildlife trade to prevent cruelty, extinction and future pandemics."

Wild animals are traded across the globe for a variety of purposes including exotic pets, fashion, entertainment, luxury food and traditional medicine. The trade is growing substantially to become one of the most prominent drivers of species extinction.

In 2019, the vast majority of wild animals imported into Canada were destined for the exotic pet industry and not screened for zoonotic disease. Once in the country, these animals are inadequately regulated by a patchwork of municipal, provincial and federal laws and not monitored.

The illegal trade is worth billions and the legal trade is estimated to be much more. World Animal Protection says the cost of preventative measures to restrict the trade is significantly less than the economic damage caused by pandemics. "Governments and those involved in the wildlife trade must stop placing short term profit over the health and welfare of animals, people and the environment," added Matlow.

Canada showed global leadership by banning the captivity and trade in whales, dolphins and porpoises for human entertainment in 2019 and more recently by signing a Leaders' Pledge for Nature ahead of the UN summit on biodiversity.

The charity says it is increasing support among parliamentarians too, including Toronto MP, Nathaniel Erskine-Smith who is accepting the charity's petition to deliver to government.

He says, "Our government should lead on the world stage to reduce pandemic risk and protect animals at the same time. The G20 summit is the perfect opportunity."

Now it is up to leaders to listen to what Canadians want.

From our offices around the world, including China, Australia, Brazil, Kenya and Canada, we move the world to protect animals. Last year, we gave more than 3 billion animals better lives through our campaigns that focus on animals in the wild, animals in disasters, animals in communities and animals in farming. For more information visit www.worldanimalprotection.ca