A Silver Lining to the 2020 Pandemic

RANCHO SANTA FE, Calif., Nov. 10, 2020 /PRNewswire/ -- In early March 2020, the entire world came to an abrupt standstill. People across the globe found their lives on hold, immersed in pandemic precautions. United by one common fear this year, individuals have felt more alienated than ever before with no clear indication of a return to normalcy. Yet a small glimmer of hope has literally crawled into view. The undeniable growing movement towards welcoming an orphan pet into our homes may be 2020's most comforting takeaway. Helen Woodward Animal Center shares the good news numbers and the heightened impact of this year's Remember Me Thursday® campaign. 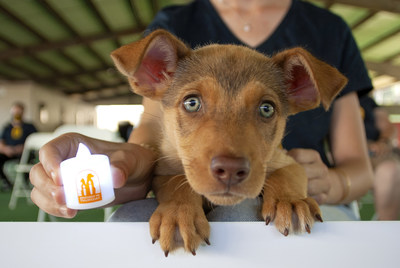 The undeniable growing movement towards welcoming an orphan pet into our homes may be 2020's most comforting takeaway.

In the first week of San Diego's quarantine, Helen Woodward Animal Center saw a startling jump in adoption numbers. From pre-quarantine March to the weeks of stay-at-home restrictions that followed, adoption numbers nearly doubled. An influx of teachers, counselors, professors and grad students (among others) took advantage of the opportunity to bring home a new furry family member, benefitting from the increased joy, love and comfort a devoted pet can bring.

Although these numbers are specific to Helen Woodward Animal Center, the Center's annual global campaign, Remember Me Thursday® (RMT), provided a heartwarming insight into a rise in the rest of the world's devotion to orphan pets.

Established in 2013 by Helen Woodward Animal Center President and CEO Mike Arms, RMT asks pet lovers and animal rescue groups to create an unstoppable, integrated voice for homeless pets on the fourth Thursday of September. Candle-lighting ceremonies and social media posts, shared across the world on one single day, shine a light on the millions of orphan animals still awaiting adoption and encourage communities to opt to adopt.

This year's campaign, held on Thursday, Sept. 24 2020, saw changes that included the new hashtag #SeeTheLight and a pivot to full color graphics, aimed at reaching new audiences through inspiring messages and stories about rescue pets and their impact on our daily lives.

The campaign saw its most exciting changes, however, in the form of worldwide participation.  In totality, 96 countries supported the 2020 RMT movement, with brand new organizations participating from countries such as Namibia, Indonesia, Croatia, Romania, Kenya, Guatemala, and Zimbabwe. Additionally, for the first time ever, animal welfare representatives from eight different countries including Australia, Bulgaria, Canada, Denmark, Estonia, Singapore, the United States, and the United Kingdom, joined together on an international Zoom call (Thursday, Sept. 24 at 9 a.m. PST) to share the significance of RMT within their respective organizations and countries.

Social media also saw a significant boost, with 2020 global Facebook postings increasing 58% over 2019's numbers, and Instagram engagement increasing by 9%. The social media contest #RememberMeThursday received nearly 6,000 entries from individuals singing the praises of their beloved rescue pets and their respective rescue organizations across the country. Overall, the 2020 campaign garnered an estimated one billion impressions, a remarkable number that doubles the collective number of impressions made since the inception of the campaign, and united over 1,100 rescue organizations.

"With all that has been dividing and separating us in 2020, it is incredibly moving to me that people across the globe can come together for orphan animals. I certainly don't know a more deserving cause to get behind and it gives me hope for the future," stated Arms.

For more information on Remember Me Thursday and a full list of participating celebrities and animal welfare organizations, go to www.remembermethursday.org.