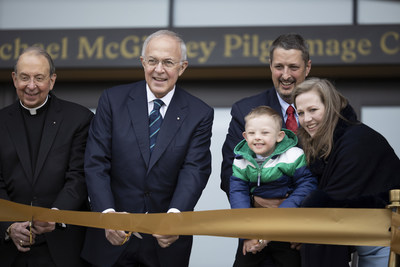 The weekend's festivities began with members of the clergy, Knights of Columbus and guests gathered at St. Mary's Church in New Haven, Conn., on Friday, Oct. 30, the eve of Father Michael McGivney's beatification, for a "Prayer Vigil for Priests." Archbishop Leonard Blair of Hartford presided over the vigil, which included reflections about Father McGivney's daily life as a priest and lessons on the example he offers clergy today.

The reflections were offered by Msgr. Joseph Donnelly, pastor of Sacred Heart Church in Southbury, Conn.; Dominican Father Gabriel O'Donnell, director of the Father McGivney Guild and vice postulator of the cause for canonization; Archbishop William Lori of Baltimore, who serves as supreme chaplain of the Knights of Columbus; and Daniel Schachle, a Knights of Columbus general agent and the father of Michael McGivney Schachle, the 5-year-old recipient of the miracle which led to Father McGivney's beatification.

During the vigil, Daniel Schachle spoke about his son's miraculous healing and the journey that led them there.

Daniel Schachle said, "We are so humbled by this extra grace from heaven. We didn't deserve it; we just kept doing what we thought God would want." Schachle added, "Our founder is proof that one good priest can make a difference for the whole world."

On Saturday, Oct. 31, the Catholic Church declared Father Michael J. McGivney "blessed," the final step before canonization as a saint.

Father McGivney was accorded the title "Blessed" through an apostolic letter from Pope Francis that was read in Latin by Cardinal Joseph Tobin of Newark, N.J., as part of the Mass of beatification at the Cathedral of St. Joseph in Hartford, Conn. A tapestry of Father McGivney's portrait was unveiled in the cathedral sanctuary after the letter was read.

Pope Francis credited Blessed Michael McGivney for his "zeal for the proclamation of the Gospel and generous concern for his brothers and sisters" that "made him an outstanding witness of Christian solidarity and fraternal assistance."

After reciting his Angelus on Sunday, Nov. 1, Pope Francis spoke of the Knights' founder: "Yesterday, in Hartford, in the United States of America, Michael McGivney, diocesan priest, founder of the Knights of Columbus, was proclaimed blessed. Committed to evangelization, he did his utmost to meet the needs of the needy, promoting mutual aid. May his example stimulate us all to bear witness more and more to the Gospel of charity. A round of applause to the new blessed!"

Celebrations continued in New Haven with a ribbon cutting at the Blessed Michael McGivney Pilgrimage Center on Sunday. The center will be located at the current Knights of Columbus Museum in New Haven, Conn.

When he first announced the center this August, Supreme Knight Carl Anderson said, "While the museum will continue to recount the Knights' history, it will also broaden its mission by focusing more on the spirituality and charitable vision of our founder and his legacy. A visit to the Blessed Michael McGivney Pilgrimage Center will enhance the formative experience of a pilgrimage to Father McGivney's tomb at St. Mary's."

The weekend concluded with a Mass of thanksgiving for newly Blessed Michael McGivney at St. Mary's Church in New Haven, Conn. Supreme Chaplain Lori was the main celebrant of the Mass, joined by Archbishop Leonard Blair of Hartford, his predecessor Archbishop Daniel Cronin who initiated Father McGivney's cause for canonization in 1997, and also Archbishop Mieczys?aw Mokrzycki of Lviv, Ukraine, to which the Knights expanded in 2013.

Anderson spoke at the conclusion of Mass about McGivney. He described his missionary spirit, working on the peripheries in a century when the Catholic Church regarded the U.S., and even St. Mary's parish, as "mission territory." It was also a time when Catholics confronted prejudice and violence for their faith. But it was these circumstances that inspired Blessed McGivney's "great achievement" ? the founding of the Knights of Columbus.

"Father McGivney would not allow his parish to become a ghetto," Supreme Knight Anderson said. "Nor would his rectory be a cloister. He would not be a bystander to the great challenges of his day. He was a parish priest who would be in the world, but not of it."

Supreme Knight Anderson added, "This is how Father McGivney lived his life as a parish priest. This is why today we call him blessed. And this is where we find his spiritual genius: He opened a practical path for millions of men to follow him in living this truth of Christian charity."

The Mass concluded with Supreme Chaplain Lori presenting Archbishop Blair with a major relic of Blessed McGivney for the Cathedral in Hartford, as well as a recitation of the prayer for canonization at Blessed McGivney's tomb.

The new blessed's liturgical memorial will be observed annually on Aug. 13, the day between his birth (Aug. 12) and death (Aug. 14).

About Father McGivney
Born of Irish immigrant parents in 1852 in Waterbury, Conn., Father McGivney was a central figure in the dramatic growth of the Church in the United States in the late 19th century. Ordained in Baltimore in 1877, he ministered to a heavily Irish-American and immigrant community in Connecticut. At a time of anti-Catholic sentiment, he worked tirelessly to offer practical solutions to their many problems ? spiritual and temporal alike. With a group of the leading Catholic men of New Haven, he founded the Knights to provide spiritual support for Catholic men and financial resources for families that had suffered the loss of their breadwinner.

Father McGivney died of pneumonia on Aug. 14, 1890 ? two days after his 38th birthday ? after falling ill amid a pandemic. Recent scientific evidence indicates that the pandemic, like the current one, may have been caused by a coronavirus.

Known by his contemporaries for his devotion to the faith and his embodiment of the characteristics of the Good Samaritan, Father McGivney remains an important role model for parish priests around the world.

In March 2008, Father McGivney was declared a Venerable Servant of God by Pope Benedict XVI, who during his visit to New York's St. Patrick's Cathedral cited the "remarkable accomplishment of that exemplary American priest, the Venerable Michael McGivney, whose vision and zeal led to the establishment of the Knights of Columbus."

Two recent books tell the story of Father McGivney and his legacy: Parish Priest (2006), his biography, and The Knights of Columbus: An Illustrated History (2020).

More information is available at www.FatherMcGivney.org.

About the Knights of Columbus
The Knights of Columbus is one of the world's leading fraternal and service organizations, with 2 million members in more than 16,000 parish-based councils. During the past year, Knights around the world donated more than 77 million service hours and $187 million for worthy causes in their communities. The organization also offers extensive life insurance services to members and their families, resulting in more than $114 billion of life insurance in force. Knights of Columbus Asset Advisors offers investment services to individuals and institutions in accord with Catholic social teachings. From helping children in need, to providing wheelchairs for the disabled, to helping stock food banks, to offering top-rated and affordable insurance products to its members, the Knights of Columbus has supported families and communities for more than 138 years.