SALEM, Mass., Oct. 29, 2020 /PRNewswire/ -- The Satanic Temple (TST) has filed a motion asking the Supreme Court to disqualify Justice Amy Coney Barrett from ruling on TST's lawsuit challenging Missouri's  abortion laws which discriminate against the religious belief of TST members that abortion is not murder.  The motion is based on Justice Barrett's public hostility to abortion, her publicly expressed religious belief that a human being comes into existence at conception and her stated opinion Roe v. Wade was a "barbaric" decision that has caused the loss of millions of lives. 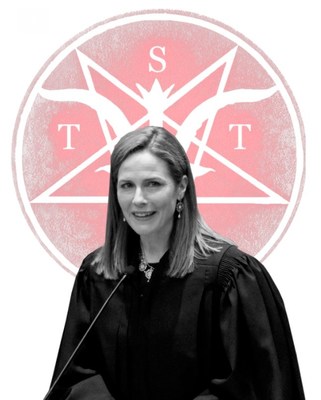 Judy Doe, a TST member, sued Missouri when it required her, as a condition to getting an abortion, to acknowledge receipt of Missouri's proclamations that "the life of each human being begins at conception" and "abortion will terminate the life of a separate, unique, living human being." Missouri required Doe to wait three days to think about the "murder" she was about to commit.  The Complaint alleged Missouri violated Judy Doe's First Amendment right to get her abortion based the TST belief that a non-viable fetus is part of a woman's body and can be removed in good conscience on demand and without consideration of its current or future condition.

The case was dismissed by the Eight Circuit Court which held Missouri's proclamations do not violate the Establishment Clause, even though they are Catholic dogma.  The Eight Circuit refused to apply the "undue-burden" standard established nearly thirty years ago in Planned Parenthood v. Casey to Doe's right to the free exercise of her religion. The Eight Circuit said TST's religious beliefs are not protected by the First Amendment. The Satanic Temple believes this highly unusual break from long-established jurisprudence was the result of a corrupt bias against the organization and asked the Supreme Court to intercede.

In its motion to disqualify, TST states Justice Barrett's impartiality can be reasonably questioned based on her previous public statements regarding the "barbaric legacy" of Roe v. Wade and her personal religious belief human life begins at conception.

In 2006, Barrett signed a statement published by St. Joseph County Right to Life the South Bend Tribune that "oppose[s] abortion on demand and defend[s] the right to life from fertilization to natural death" and that Roe v. Wade created a "barbaric legacy" that should be struck down to "protect the lives of unborn children." Among other public declarations, Barrett most notably affirms her religious position on abortion in her 1998 academic article, Catholic Judges in Capital Cases: "Both the state and the unborn child's mother are (at least typically) acting with gross unfairness to the unborn child, " and, "abortion and euthanasia take away innocent life." Similarly, she defends the teachings of the Catholic Church that "human life must be respected and protected absolutely from the moment of conception" and that "the law must provide appropriate penal sanctions for every deliberate violation of the child's rights."

Federal law (28 U.S.C. §455(a)) states, "[a]ny justice, judge, or magistrate judge of the United States shall disqualify himself in any proceeding in which his impartiality might reasonably be questioned." TST cofounder and spokesperson Lucien Greaves says that "based on her public statements, any objective observer would reasonably believe it is not possible for Justice Barrett to set aside her deeply-held religious beliefs on the illegitimacy of abortion to fairly and impartially consider TST's religious belief that abortion is not murder but the permissible removal of unwanted tissue."

Greaves adds, "In the opening statement of her confirmation hearings, Justice Barrett said, 'I believe Americans of all backgrounds deserve an independent Supreme Court that interprets our Constitution and laws as they are written.' With this noble proclamation, we are glad to see that Justice Barrett recognizes her oath as a member of the Supreme Court to maintain impartiality and to uphold the integrity of the legal system as a whole. We would prefer Justice Barrett honor her promise to the American people by recusing herself from TST's case because she is clearly hostile to TST's view that a fetus is not a human being.  But if she does not do so, we are asking the Supreme Court to enforce the law and disqualify her because established legal precedent requires it."

About The Satanic Temple

The Satanic Temple, subject of the critically-acclaimed documentary, Hail Satan?, and the academic analysis, Speak of the Devil, confronts religious discrimination to secure the separation of church and state and defend the Constitutional rights of its members. In response to Oklahoma and Arkansas placing a Ten Commandments statue on Capitol grounds, TST offered its bronze Baphomet statue to stand alongside the Christian monuments. TST hosts the "After School Satan" club to counter the Evangelical "Good News Clubs" in public schools across the country to promote a plurality of religious viewpoints. The mission of The Satanic Temple is to encourage benevolence and empathy, reject tyrannical authority, advocate practical common sense, oppose injustice, and undertake noble pursuits for the individual will. For more information about The Satanic Temple, visit https://thesatanictemple.com/.