HARRISBURG, Pa., Oct. 20, 2020 /PRNewswire/ -- Plaintiffs in a federal lawsuit have filed a motion seeking a restraining order to block the use of private funds from billionaire Mark Zuckerberg for use in local election management, a statutory responsibility of state officials including the Pennsylvania Legislature. 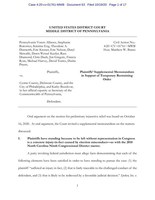 The motion, filed on October 19 in U.S. District Court, Middle District of Pennsylvania, highlights how a grant for $10 million from the Center for Technology and Civic Life (CTCL) explicitly requires the City of Philadelphia to open no fewer than 800 new polling places ? and failing to do so may require the City to forfeit the grant money. The funding from Mark Zuckerberg also pays for judges to oversee ballot counts and the outcome of disputes that arise regarding the eligibility of ballots in the election.

"The Center for Technology and Civic Life is using Mark Zuckerberg's millions to require the City of Philadelphia to open 800 new election offices and hire judges who will oversee ballot counts and rule on ballot disputes based on their own admission in court documents," said Tom King, the legal counsel representing the plaintiffs in the case. "Municipal leaders have ceded their role as a local authority to CTCL with powers that rightfully belong to the people of Pennsylvania through their representatives in Harrisburg by effectively inviting this partisan billionaire into the ballot counting room," he concluded.

"We are fighting Mark Zuckerberg around the country where he is using CTCL, a nonprofit founded and managed by Obama-affiliated operatives, to funnel hundreds of millions of dollars to leftist strongholds in several battleground states to determine the outcome of the election," said Phill Kline, Director of the Amistad Project of the Thomas More Society, which is supporting the litigation. "This is a scheme engineered by partisan activists under the guise of COVID-related support. The privatization of the election undermines the integrity of the election," he added.

The plaintiffs in the case, the Pennsylvania Voters Alliance and several officeholders and candidates, previously filed a complaint against Centre County, Delaware County, and the City of Philadelphia, and Secretary of the Commonwealth of Pennsylvania, Kathy Boockvar, in Civil Action No.: 4:20?CV?01761?MWB.

The grants to Philadelphia and the counties are part of a $350 million contribution by Facebook founder Mark Zuckerberg, which is being funneled into leftist strongholds selectively in several swing states to turnout voters for liberal politicians. This strategy may tilt the results of the presidential election in the most critical battleground states in the nation, including Pennsylvania.

For more information on this and related issues, go to got-freedom.org.