UTICA, N.Y., Oct. 19, 2020 /PRNewswire/ -- Many pundits and academics are saying younger voters could wield considerable power in the November 3, 2020 presidential election. If these experts are right younger voters could sway this election in two ways: one scenario would be they turn out to vote in record numbers, and put Joe Biden and Democrats in control of the presidency and Congress, which would bring about sweeping changes to many institutions, social programs and corporations. The second scenario is Millennials do not come out in droves to vote, and have minimal impact on the 2020 presidential election. This scenario would make Trump's path to re-election easier, but Millennials would still face set-backs due to the lingering effects of the Covid-19 pandemic and recession. 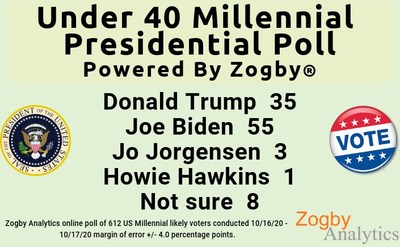 A brand new nationwide Zogby Poll® of Millennial likely voters (born 1980-1995) shows a majority (55%) of Millennials back Joe Biden over President Trump (35%), while third party candidates, Libertarian Jo Jorgensen (3%) and the Green Party's Howie Hawkins (1%), failed to make much of an impression on Millennial voters. In addition to Biden's commanding lead with Millennials, he also performed better than the President among many important demographics. Below are some of the key findings from the poll:

There were some demographics, among surveyed Millennials, where the president did make the race closer or led Joe Biden.