LOS ANGELES, Oct. 14, 2020 /PRNewswire/ -- Approaching this year's General Election on November 3rd, REVOLT has relaunched Sean "Diddy" Combs' widely popular VOTE or DIE! initiative, to rally the next generation of leaders to exercise their right to vote in this critical election. 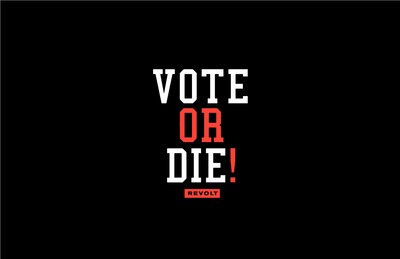 As we face a pivotal turning point in our nation's history, being politically active means more than selecting a President; it symbolizes your right to take action now. REVOLT recognizes "Vote or Die" is relevant now, more than ever.

"Our research shows that the youth are desperate for a definitive shift in how America works, so it's critical that we inform and politically activate this generation to take action and define the future," says Detavio Samuels, Chief Operating Officer, REVOLT TV.

To reintroduce VOTE or DIE!, REVOLT will launch a campaign profiling artists, athletes and cultural leaders wearing the symbolic VOTE or DIE! t-shirt. During the month of October and November, REVOLT will host weeks of VOTE or DIE! content on its platform.

Programming for the takeover includes: