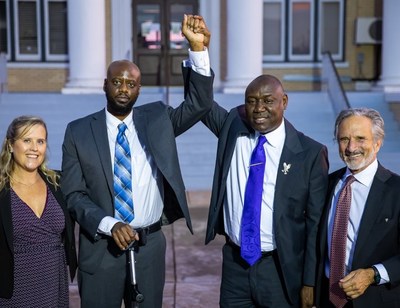 Crump and Cox represented Duane Washington, a former career Army sergeant and resident of Gadsden County, who was traveling home on his motorcycle via I-10 near Tallahassee on July 24, 2018, when he encountered a 45+ vehicle pileup. The massive crash was caused by weather conditions coupled with speeding by a Top Auto commercial vehicle driver. Washington attempted to drive his motorcycle onto a median to avoid the pileup and the risk of other vehicles crashing into him ? but before he could do so, Washington collided with a stopped truck that had no lights on in the emergency lane. The collision launched Washington into the median and left him with severe, life-threatening injuries.

"This proud veteran sacrificed so much to serve our country, and was a competent, safe driver who never even had a ticket while riding his motorcycle. The consequential negligence displayed by the Top Auto driver wrecked not only vehicles but lives," Crump said. "This is a significant, historic ruling for justice. COVID demanded an unprecedented Zoom trial, but it didn't stop the jury from hearing and understanding the evidence and returning a record verdict."

Washington sustained life-altering trauma, including breaking both sides of his pelvis away from his spine, severe colon and urethra damage, permanent incontinence, and loss of sexual function. Washington had a colostomy bag installed during his more than six-month hospital stay and is in constant pain. Despite intensive physical therapy, Washington can walk only with a specialized arm crutch, and his right leg is withering.

"Mr. Washington may never feel physically comfortable again, but this verdict ensures that he will be well taken care of and his family will be financially secure," Cox said.