SAN FRANCISCO, Oct. 6, 2020 /PRNewswire/ -- Amelia Ray never met her paternal grandfather because he was murdered by a white man in Butler, AL, after her father, who was still a boy at the time, refused to address the man as "Sir". While under quarantine and witnessing the nation seethe with collective indignation and unrest, Ray felt her family history come bubbling to the surface.

"I was going crazy, wanting to yell, cry, hit something, run through the streets, stay locked indoors and sleep all at the same time," Ray explains. Amidst this confusion, Ray received a text from longtime collaborator Jake Wood stating he had "an opportunity to record a video, preferably with political commentary." Almost immediately Ray texted Wood back. "I told him I was going to write a song in the voice of a white overseer about how dirty the Negroes were, and that I wanted him to dress up like a field hand." Wood responded, "That sounds real bold. I'm in."

"Hambone Says" uses several musical genres to detail a history of racially motivated killings. The lyrics allude to recent events such as the murders of Breonna Taylor and Ahmaud Arbery but also reference the 1967 Detroit riots and the 1923 Rosewood Massacre. "I wanted to transmit the exasperation, confusion and fury I saw in the streets and felt in my soul," Ray says.

Grappling with the music industry in a coma, and with no safe means of performing with others, Wood - who was the drummer in the San Francisco "Hamilton" company until production was halted in early March - took to Bay Area rooftops in search of a safe performance space. "Small rehearsal studios with poor ventilation prevented me from making music with others. A roof, however, is far safer, minus the whole falling-to-your-death risk." Wood adds that along with the safety of the outdoor setting, "you can't beat the views."

The track for "Hambone Says" was recorded live during the filming of the video. Releases on all platforms on Friday 09 October 2020.

Amelia Ray is a writer, composer, singer, multi-instrumentalist, arranger and the creator and host of "Up, Up & A Ray" - a weekly variety show. From March-May 2020 she organised The Quarantuned Music Festival - a series of 24-hour, worldwide, virtual music festival to benefit artists affected by COVID-19 cancellations. 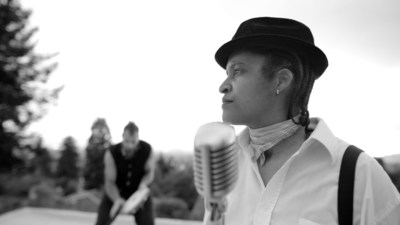 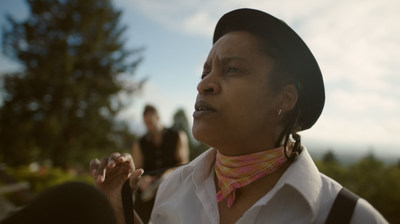