VANCOUVER, BC, Oct. 1, 2020 /CNW/ -- Several ads have been removed from a thought-provoking billboard campaign running in Vancouver, Canada. The campaign ? intended to alert that the world, including Canada, is overpopulated ? has generated a flurry of media coverage and dialogue. A massive spike in visits crashed the campaign website for several days. 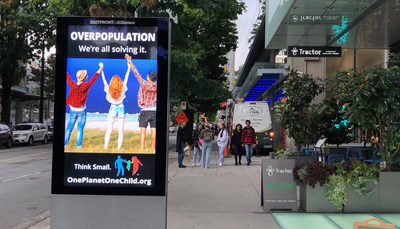 Some coverage and conversations have been sharply critical of the campaign. That criticism is misplaced, according to World Population Balance. The organization issued an apology Tuesday that states: "While the ad is true, loving and inclusive, we apologize for creating an ad that could too easily be misconstrued. We have removed that and similar ads from the campaign."

Additional ads were removed Tuesday by the outdoor advertising firm whose billboards feature the campaign, relenting to public pressure. "We expected to get some blowback, because there is a lot of myth, misinformation and misunderstanding around the issue of overpopulation," notes the organization's executive director, Dave Gardner. "We even expected accusations of racism, because they come up regardless of your message about overpopulation. World Population Balance is resolved to help people understand that addressing overpopulation isn't inherently racist." Gardner insists, "There is no place for racism in the modern sustainable population movement. That's a major point of our campaign, so it was painful for us to discover that seeing one particular ad outside the context of our other ads might allow someone to draw an erroneous conclusion."

Some critics assumed racism on the part of the campaign due to inclusion of a cute black child on one ad. Gardner wants to assure all that the campaign rejects racism and is, in fact, intended to eliminate racism if and when it crops up in the overpopulation conversation: "They'll be glad to know there is no racist intent here. We were trying to be inclusive and got tripped up." The apology explains, "These ads are about ensuring a beautiful future for all children. We endeavored to be as inclusive as possible in this ad campaign, so we were running six variations of this ad, depicting children or families of different nationality or skin color. We want to include everyone in the conversation."

Some complained the campaign attempts to dictate their family size. "We're not blaming anyone, we're not judging anyone, and we're not trying to tell anyone how many children they can have," notes Gardner. "We're simply trying to ensure everyone making a family-size decision has the facts about the tenuous position we are in today on this planet. The misguided attacks and attempts to get this campaign shut down are a classic illustration of why too few are aware that the expanding human presence on this planet is extinguishing other species, depleting fertile soil, drying our rivers and aquifers, and destabilizing our climate."

Others complained the campaign has no place in Canada, where the fertility rate is well below replacement level, and should instead be directed to audiences in high-fertility nations in Asia and Africa. The campaign website explains, "overpopulation is not just a problem to be addressed in the Global South; it is a very real problem in the industrialized world ? because each new person added here will have a giant footprint." Gardner adds: "Those who think overpopulation is a problem only in nations with higher birthrates may in some cases be racists; or they may just be uninformed. Either way, we're trying to start a conversation so we can set them straight about how we, the privileged, in the overdeveloped world, need to work on our own rampant overconsumption and at the same time keep lowering our birth rate."

The organization's The Overpopulation Podcast published a special episode today addressing the response to the campaign.

Members of the team are available for interviews via Zoom, Skype, telephone, etc. Contact info, actual photos and drone footage, when available, plus other graphics and video for media use, at https://oneplanetonechild.org/media-resources/.

About World Population Balance
World Population Balance works to alert and educate that overpopulation is a root cause of resource depletion, species extinction, poverty, and climate change. The nonprofit's mission is to chart a path for human civilization that ? rather than causing greater misery ? enables good lives on a healthy planet. The organization advocates and supports a smaller, truly sustainable human population ? through dramatic and voluntary reduction in birth rates.