LOS ANGELES, Sept. 16, 2020 /PRNewswire/ -- What was initially intended to be a temporary solution for a temporary problem has bred a popular new entertainment experience that is now going nationwide. CBF Productions is excited to announce the expansion of their Concerts In Your Car series to two new cities in the coming weeks. This expansion will start with the Del Mar Fairgrounds in San Diego County on Friday, September 25, 2020, and will be followed by the Arizona State Fairgrounds in Phoenix in October 2020. The Del Mar series will kick off on Tuesday, September 22nd with a showing of "Grease." To view the full lineup and for more information, visit www.concertsinyourcar.com/sandiego. 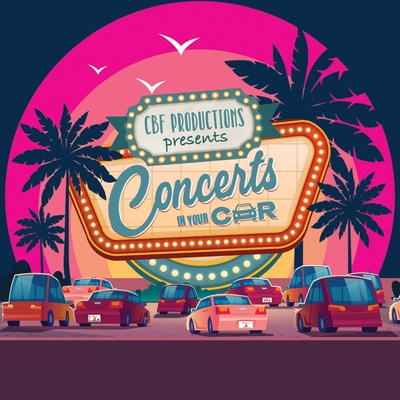 CBF Productions has been at the forefront of the drive-in trend, creating Concerts in Your Car ? California's first, "in your car," social-distancing live event series featuring a unique circular stage with massive video monitors and a state-of-the-art sound system. Concert-goers are given a theater-in-the-round experience and the ability to adjust sound levels through their car radio. They also can see and interact with one another with the download of a Zoom link for a more connected crowd experience.

CBF Productions has staged more than 45 drive-in events since its June launch at the Ventura County Fairgrounds in Southern California, offering everything from comedy shows and concerts, to a family-friendly circus and movies. In November, the 700-car venue will launch its "Holidays in Your Car" series, with a mile-and-a half-long light display.

CBF Productions founder, Vincenzo Giammanco, says he plans on continuing the series even after COVID restrictions are lifted. "We've seen that people really like this sort of viewing experience, where they can adjust the volume and enjoy a show from the comfort and safety of their cars. I feel that we've only scratched the surface of what this space can be," he says.

To offer a safe and enjoyable experience, Concerts in Your Car are following the CDC and State of California Guidelines, and working with local States and Counties to ensure each event meets or exceeds all recommended standards. All event staff will be wearing required PPE (personal protective equipment). During the concert, attendees are asked to stay inside their vehicle to view the performers from the stage or on the giant screens. All guests that exit their vehicle must wear a mask or face covering and remain next to their vehicle, and no more than two guests per vehicle can leave to use the restroom at the same time.

Event tickets are priced per car, per section "ring" and available in advance only. Movie tickets are general admission and vehicles will be placed on a first come, first served basis to an assigned parking space.

ABOUT CBF PRODUCTIONS:
One of California's largest traveling festival production companies CBF has been producing a variety of adult and family-friendly events for over 12 years. From their legendary Boots & Brews Country Music Festivals to Tequila & Taco Festivals, Winter Wine Walks and more, CBF showcases the best craft breweries, wineries, and tequilas in the state, combined with mouthwatering BBQ and local cuisine, alongside amazing entertainment.