If successful, the program will provide Newfoundland and Labrador with ocean technology jobs in an emerging innovation economy as part of Canada's National Shipbuilding Strategy

NORTH VANCOUVER, BC and MOUNT PEARL, NL, Sept. 16, 2020 /CNW Telbec/ - Seaspan Shipyards (Seaspan ULC) and Genoa Design (Genoa Design International Ltd.) announced today that they have entered into an exclusive teaming agreement to design and build the Canadian Coast Guard's future Polar Icebreaker. Following a comprehensive competitive process, Seaspan was selected in 2011 as Canada's National Shipbuilding Strategy (NSS) strategic partner to build its large non-combat vessels, which included the Polar Icebreaker. Under the terms of the teaming agreement, if Seaspan Shipyards is re-confirmed as the builder of the Polar Icebreaker by the Government of Canada, Genoa will provide 3D modeling and design services for the program, creating sustained long-term ocean technology jobs in Newfoundland and Labrador's emerging innovation economy. 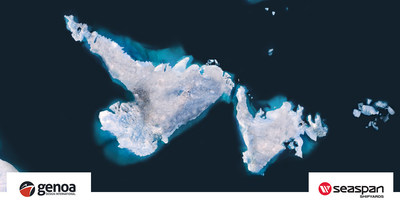 With $185 million in capital infrastructure investments, Seaspan's Vancouver Shipyard was purpose-built for the construction of the Polar Icebreaker and is the only shipyard in Canada with the workforce, facilities and capacity in place today to deliver the complex vessel by the Coast Guard's critical 2029 deadline. A new Polar Icebreaker is urgently required to replace the CCGS Louis S. St-Laurent, which is the only ship in the Canadian fleet capable of year-round operations in the Arctic and is now in its sixth decade of service and rapidly approaching end of life.

Seaspan will draw on Genoa's expertise in leveraging advanced technology to develop digital ship models. The company has played a critical role over the past six years in the design of modern ice-capable ships for the Canadian Coast Guard and is also currently working as a sub-contractor on the Polar Security Program in the United States, the US equivalent of the Canadian Polar Icebreaker program.

Since being selected as Canada's strategic NSS partner, Seaspan Shipyards has helped rebuild Canada's marine industrial sector and become an economic engine for the industry across Canada. Seaspan has also become a revenue lifeline for small to medium-sized businesses (SMEs) across the country, delivering $1.5 billion to Canada's gross domestic product* and awarding more than $1 billion in NSS-related contracts. Genoa Design is one of these SME successes. Growing from 20 employees to more than 220 since joining Seaspan's supply chain in 2014, Genoa has matured its service offering, gained significant expertise, and expanded its business. The company is now a recognized industry leader, a Canadian exporter, and a champion for the emerging innovation economy in Newfoundland and Labrador.

Uniquely positioned along Iceberg Alley, Newfoundland and Labrador is the go-to jurisdiction for Arctic know-how and expertise, and a global leader in cold-ocean technology and marine operations. As a gateway to the Arctic, the province is home to the Canadian Coast Guard Atlantic Regional Headquarters, a primary base of operations servicing Canada's Arctic, and home port for Canada's existing heavy icebreaker, the CCGS Louis S. St-Laurent. It is also home base for more than 40 research facilities that are focused on the ocean, the Arctic, and harsh environment research and technology development, led by many of the world's authorities on cold-ocean, ice-prone environments and severe sea states.

At a time when the need to leverage federal procurement dollars to support Canadian companies and employees has never been greater, construction of the Polar Icebreaker by Seaspan's team will support thousands of Canadian jobs across the country over the multi-year life of the program. Beyond Genoa, the National Shipbuilding Strategy and the Polar Icebreaker program represent jobs and procurement opportunities well-suited to Newfoundland and Labrador's established cold-ocean and mega-projects supply chain. This is especially important now, as the provincial economy has been hit hard by both the COVID?19 pandemic and the need to diversify the Newfoundland and Labrador economy.

Genoa Design joins Ontario's Heddle Shipyards, the largest operator of shipyards on the Great Lakes, on Seaspan's Polar Icebreaker team. Heddle will fabricate ship modules at its three Ontario shipyards, in Hamilton, St. Catharines and Thunder Bay, and at its facility in Mount Pearl, Newfoundland and Labrador.

Quotes
"This province is home to world-renowned ingenuity, and it is wonderful to see a local company making a mark, as Genoa is under the leadership of CEO Gina Pecore. As Premier of Newfoundland and Labrador, I want to congratulate Genoa Design on this important teaming agreement with Seaspan Shipyards to create Canada's future Polar Icebreaker."
?  Honourable Andrew Furey, Premier of Newfoundland and Labrador

"A world-class marine supply chain in Canada is critical to our ability to build world-class ships for Canada. One cannot happen without the other. Genoa is a classic example of the industrial and economic impact possible when innovation, investment and opportunity come together. As Canada's national shipbuilding partner, Seaspan has put together the best team in Canada ? coast-to-coast ? to deliver the Polar Icebreaker on the Coast Guard's critical timeline."
? Mark Lamarre, Chief Executive Officer, Seaspan Shipyards

"Genoa's NSS work with Seaspan has fueled our growth and enabled us to earn a place on major shipbuilding programs in North America. We're pleased and ready to support Seaspan's mission to deliver Canada's next Polar Icebreaker and to help extend the benefits of that program to Newfoundland and Labrador. As a global leader in Arctic and cold ocean technology and marine operations, this province is home to a cluster of companies, innovators and R&D facilities that can provide unmatched value to the construction of Canada's next Polar Icebreaker."
? Gina Pecore, Chief Executive Officer, Genoa Design International

About Seaspan Shipyards
Seaspan Shipyards, a division of Seaspan ULC, is a leader in Canada's shipbuilding and ship repair industry. With modern facilities and a dedicated workforce of 2,700 in North Vancouver and Victoria, the company has proven itself to be a trusted partner on a range of complex projects for both government and the private sector.

Seaspan Shipyards is proud to be Canada's chosen non-combat shipbuilder under the NSS. In this capacity, the company is building state-of-the-art ships in Canada for the Canadian Coast Guard and Royal Canadian Navy. Through its NSS-related work, Seaspan Shipyards is creating jobs, generating economic benefits and rebuilding Canada's shipbuilding and marine industries.

About Genoa Design International
Genoa Design International has been providing production design and 3D modeling services to shipbuilding and offshore industries since 1995. In that time, they have become one of the most sought-after production design firms in the North American shipbuilding market with a commitment to quality as an ISO 9001:2015 certified organization.

With a team of more than 200 designers, engineers, naval architects, administrators and technical support staff dispersed between their four locations in Mount Pearl, NL; Vancouver, BC; Halifax, Nova Scotia and New Orleans, US, Genoa provides expertise and dedicated support throughout the shipbuilding process. Currently, Genoa is active in major government initiatives such as Canada's National Shipbuilding Strategy (NSS) and in commercial contracts in shipyards throughout North America.