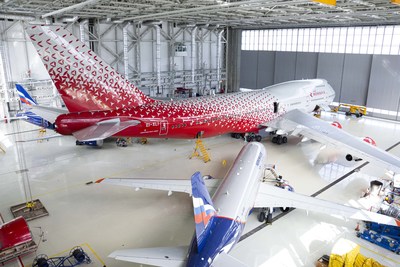 Construction of the hangar complex was completed in 12 months, a record time for the construction of complex technical facilities of this kind in Russia, and JSC SIA invested more than $ 57 million in the project.

Alexander Ponomarenko, Chairman of the Board of Directors of Sheremetyevo International Airport stated, "We are pleased to open the new hangar complex for the Aeroflot Group today. The new hangar will enable servicing aircraft at Sheremetyevo and help to increase safety and optimize operation of our airline partners."

The commissioning of a modern hangar complex is one of the stages of Sheremetyevo's Long-Term Airport Development Program. The complex has a total area of 16,760 m2, including a hangar section for aircraft service and maintenance with a five-story industrial extension and a two-story annex for production with hazardous materials, a compressor station, a pumping station for fire fighting with tanks to provide a consistent water supply, and a transformer substation with a diesel generator. The complex also includes a pre-hangar area for parking and towing aircraft to the hangar with roads and technological platforms for the passage and maneuvering of special equipment.

The complex is equipped with modern engineering equipment for comprehensive check of the technical condition of aircraft, which is performed once a month or every 500 flight hours. Special attention has been given to compliance with environmental standards, including installation of local water treatment facilities for industrial effluents.

Rossiya Airlines has a strong flight-safety record and is included annually in the ratings of the German research center Jet Airliner Crash Data Evaluation Center (JACDEC). In 2020, Rossiya Airlines secured its 32nd place ranking, significantly improving its result over 2019, when it ranked 47th .

Rossiya has been the holder of the IOSA (IATA Operational Safety Audit) certificate since 2007, which is confirmed annually following the successful completion of the operational safety audit by the International Air Transport Association (IATA). The international organization audits airlines against more than a thousand operational safety requirements. One of the main aspects studied is the maintenance of airworthiness and maintenance of aircraft, ground handling, and aviation safety.

Sheremetyevo International Airport is among the TOP-10 airport hubs in Europe, the largest Russian airport in terms of passenger and cargo traffic. The route network comprises more than 230 destinations. In 2019, the airport served 49 million 933 thousand passengers, which is 8.9% more than in 2018. Sheremetyevo is the best airport in terms of the quality of services in Europe, the absolute world leader in punctuality of flights, the owner of the highest 5-star Skytrax rating. You can find additional information at http://www.svo.aero.

Rossiya Airlines is part of the Aeroflot Group. The total route network of the airline includes more than 130 destinations. At the end of 2019, Rossiya carried more than 11.6 million passengers, was recognized as the leader in transfers through Pulkovo Airport, and was also awarded the Skyway Service Award in the nominations for Best Airline for Tourist Destinations, Best Economy Class, Domestic Regular Transportation". In 2019, the Rossiya Airline brand was included in the top 50 valuable brands of the country according to the international consulting company Brand Finance. Since 2014, the airline has been the official carrier of the Zenit football club.