ROCKY MOUNT, Va., Sept. 5, 2020 /PRNewswire/ -- "My Brothers' Crossing" is a spiritually uplifting film that depicts a true story about a black pastor that unintentionally has a head on collision with his car into a motorcycle killing a white couple shortly after the Missouri riots in August 2014. The movie will play in select Regal and AMC theaters throughout the US starting Thursday September 3rd.

My Brothers' Crossing is based on the book, "In the Blink of an Eye: Forgiveness in Black and White" and tells the story of the tragic death of motorcycle bikers Bobby and Pam Clark. The story unfolds from the perspective of Bobby's brother, J.T. Clark, of whose on-screen character is played by award-winning actor Daniel Roebuck (The Fugitive, Getting Grace). Clark eventually forgives C.J. Martin, the black man who killed his brother and is played by veteran actor James Black (Godzilla, Days of our Lives).

The story dives deeper than just forgiveness, it also chronicles the journey of J.T.'s salvation during the turmoil of losing his brother. Clark stated that it's like one of those stories you wouldn't believe unless it happened to you.

Movieguide gives the movie 3 out of 4 stars and says it's an inspiring story about the power of forgiveness, loving your neighbor and the importance of God.

The movie transcends human forgiveness and redemption, a much needed story amidst the current coronavirus pandemic, protests and economic chaos currently in the US today. Film director Ricky Borba says the film couldn't have come out at a better time.

"The film was initially set to premiere in theaters last fall, but we are very thankful it was delayed and is hitting theaters now when this country so desperately needs healing across all racial lines." Borba went on to say, "I really believe God saved the film to premier for such a time as this."

Actor Black was moved by not just the forgiveness element of the story, but also said, "the fact that after the Clark family forgave the Martin family, they loved them unconditionally."

Borba said that he only had about two weeks to prepare for the directing of the movie, where his prior directorial debut faith based film, "The Talking Tree", he had 18 months to prepare. Having such a short period of time to prepare created a unique set of challenges but he said it also created an incredible bond among the crew to work together as a team. Borba beamed that he couldn't be more proud of the performances on screen and behind the scenes.

One thing he couldn't foresee was how many life-saving doors God would open on such short timing during the shoot. Borba's favorite example was when the production crew needed to film at the local courthouse on short notice, and thankfully, the court allowed the crew to use the courthouse without interruption for the day. That allowed them to stay on their shooting schedule without delay. Borba was thankful to the Lord.

The movie was produced by Tony and Edna White, and executive produced by Reverend Samuel Rodriquez, who co-produced the film "Breakthrough" in 2019. Rodriguez says the story of forgiveness is timely in a way that cannot be mere coincidence.

"Especially at a time when we are confronted with the unresolved problem of racism in America, our nation needs to remember that forgiveness can eclipse our racial divisions and heal even our deepest wounds." Rodriquez continued, "I am honored to be part of such a powerful and compelling film, one that shares the hope of transformation for individuals and entire communities through the power of Jesus Christ."

My Brothers' Crossing is being distributed by Atlas Distribution and will open in several hundred Regal and AMC theaters across the US starting Thursday September 3rd.  For more information please call JT Clark at (540)986-6106 or email jt.clark@mybrotherscrossing.com

The trailer for the film can be seen here:
https://www.youtube.com/watch?v=6D9PSeGQBxA 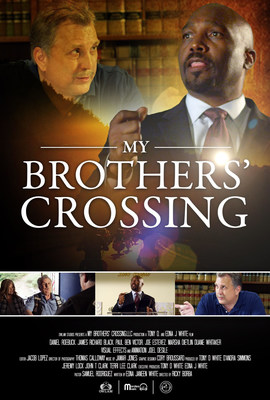