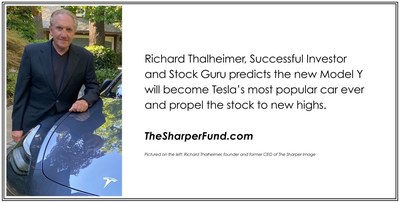 This impressive growth reflects the growing success of Tesla in several areas. The two most recent Tesla car introductions have been huge successes. Model 3, which is a scaled-down version of the Model S sedan, has sold better than expected. The latest Model Y, rolling out of the factory as I write this, is just beginning its run and may be the most popular Tesla ever. It delivers in many ways, giving drivers an SUV body at half the price of the Model X, which it closely resembles.

Tesla is the most shorted stock of any U.S. equity.

"Jim Chanos has repeatedly claimed Tesla will never be profitable, will not be able to produce cars in a timely manner, and will be overshadowed by new competition. 'The big guys, such as Porsche and Audi, are coming after Tesla's seven-year-old Model S with better, faster, more stylish cars at more attractive price points." Source

Chanos has so far been proven wrong. The competition has not met Tesla in speed, range or price. Style is in the eye of the beholder - and I love the Tesla style. Source

"Even worse, Dusaniwsky estimates that Tesla short-sellers have lost a staggering $30.45 billion since 2010, as of July 3, 2020. And the stock has continued to climb, trading around $1,500, making the losses even greater for Chanos and other short-sellers." Source

I view Elon Musk as a hero, visionary, genius, and wunderkind of enormous proportions, and put him up there with Thomas Edison, Henry Ford, and Steve Jobs. What he has accomplished is singularly amazing. Musk both introduced and found acceptance for all-electric cars. To start a car company from scratch and, within a decade, sell more cars in its class than BMW, Mercedes, or Audi, is an unbelievable and unlikely success which defies imagination.

Volkswagen, CEO, Herbert Diess agreed: "Volkswagen Group's CEO again praised Tesla's Elon Musk, this time for showing it's possible to profit off electric cars even in the midst of a global pandemic. Tesla and VW group's Porsche sports-car division will be among the few automakers who navigate the market turmoil caused by COVID-19 without suffering a quarterly loss."

"Elon Musk delivers results that many have deemed impossible," Diess wrote in response to a post by auto industry researcher Ferdinand Dudenhoeffer. Source

Morgan Stanley analyst Adam Jonas "thinks Tesla will sell 3 million units a year by 2030 after factoring in the new factories and upside demand for the Model S, Model X, Model 3, Model Y, Cybertruck, a compact model, Semi and even the Roadster."

"It's becoming increasingly obvious that Tesla is going to become a very large company, approaching (if not exceeding) Toyota or VW revenues in the next decade and leaving the world's largest luxury OEMs behind. For the first time during our 10 years of coverage we're starting to model this company as a very, very large auto maker. Our revised 2030 revenue forecast is over $170bn of revenues, a substantially larger company by revenue than Ford or GM." Source

Very important to the Tesla success story is the Supercharger network, which is available only to Tesla owners. There are about 2,000 Supercharger stations around the world. This is a significant advantage because, driving cross-country, you can usually find a fast-charging Supercharger station conveniently located next to a Starbucks or shopping center. Just pull in, charge for 20 minutes, and continue on. This is a big advantage compared to the competition, which leaves you scratching your head where to charge up. Elon Musk figured from the beginning this would be a huge advantage for Tesla, and that's one reason Tesla is the first choice for buyers moving into an electric car.

"To wit: The Model Y Long Range's 316-mile boundary embarrasses Audi's official range of 204 miles, or the Jaguar's 234 miles. That yawning range gap is the difference between easy round-trips and thumb-twiddling charging stops and detours ? or roads not taken at all. (The Model Y's ingenious heat pump, a first for any Tesla, should help preserve driving range in cold climates)."

"Even the $62,900 Model Y Performance version, with 456 horsepower and 497 pound-feet of torque, manages 291 miles of range. And the Performance's vicious, 3.5-second slap to 60 mph will leave the Jaguar and Audi wondering what hit them. That 3.5-second moon shot is faster than several vastly pricier fossil-fueled SUVs, including the Porsche Macan Turbo and Alfa Romeo Stelvio Quadrifoglio."

"For $10,000 less than the Performance edition, the Long Range ? also with dual electric motors, one per axle ? generates 384 horses, 376 pound-feet of torque, and a Tesla-cited 4.8-second scamper to 60 mph. Perhaps more impressive than stoplight speed is the way the Model Y catapults from 30, 70, or 90 mph, with the merest squeeze of the throttle. Passing internal-combustion cars in the Tesla is so easy, it's not even fair. But it is fun." Source

It's hard to believe this upstart company delivers such outstanding performance and outsell its competitors by a landslide. This is an amazing accomplishment.

The New York Times described it this way: "Tesla stock has tripled in the last several months. Mr. Musk is the first person in almost a century to come out of nowhere and create a car company with that much volume, showing other plodding car companies how electric cars can be cool, sexy, and incredibly efficient."

The Tesla blog, Teslarati, summed it up this way: "The Model 3 has sold more than 142,300 units so far in 2020. Tesla's affordable mass-market vehicle has dominated the Top 20 list for some time, and it is not much of a surprise. With the performance specifications of a high-end automobile and the price point of an affordable family sedan, the Model 3 is a perfect fit for any individual or family looking to join the Tesla revolution." Source

"Peter Thiel, who helped build the company that became PayPal with Mr. Musk, told me (Maureen Dowd), 'He's on top of the world. All of the people who have been shorting Tesla stock, who constitute a kind of 'hate factory' against the company, have been totally crushed." Source

One reason Chanos misses the point about the future success of Tesla is, in my opinion, because he keeps evaluating it as a car manufacturing company. Tesla is much more than that; it is an energy company with many different opportunities to dominate its markets in the future. Consider this analysis from CleanTechnica:

"Tesla's business model encompasses what's been called the Energy Triumvirate: transportation, home solar, and battery storage. The 3-way renewable energy system provides security against rising energy costs, connected software, and solar production for energy independence. And that reciprocity is just one reason to look at Tesla as much more than either a car company or a technology company." Source

A second-quarter profit was essentially the last step in qualifying Tesla stock for inclusion in the S&P 500. That's good news for bulls because it generates demand for Tesla stock from index funds and others that track the S&P 500 closely.

Let's pivot from the numbers, and talk products, specifically the new Model Y. I bought one just recently, taking delivery at the San Francisco Tesla showroom. What a smooth experience! The purchase was done online until the actual final handoff. When I showed up to pick up my new Y, in my 15-minute window, I was surprised that there were other folks standing there, for deliveries before me, and after me. It prompts the question, "What other car showroom is delivering a new car every 15 minutes?" This steady delivery pace may not go on every day. But it was impressive.

After looking over the car, and driving away, I noticed the car drives so well. I have a Model X already, so my bar is high for comparison. But the Y delivered in every way. The ride quality, the fit, and finish, the overall experience, is truly exceptional.

I took my new Y to a favorite body shop for a professional opinion of the manufacturing quality. My resident expert pronounced the body perfect and was impressed there were no gaps or misaligned body panels. That is an improvement from other Tesla cars he's seen in the past. It bodes well for future Tesla production quality.

The Model Y really shines as a harbinger of future success for Tesla. It is a mid-size SUV, which is the sweet spot for vehicle sales today. It has generous space for people and cargo. The acceleration and handling are superb. And it's selling like hotcakes.

Electric cars in general are passing the tipping point, becoming more affordable and desirable. "The pandemic has made electric cars more inevitable," declared the headline for an in-house interview with Volkswagen Group of America senior VP of Strategy Reinhard Fischer.

"I expect the pandemic could cause the transition to electric vehicles to briefly hesitate but then accelerate. While sharing services were heavily promoted before the pandemic, fear of virus transmission could cause more people to return to personal cars," Fischer said. "In this scenario, electric cars have the added advantage of home charging, allowing drivers to avoid possible infection at gas stations," he added Source

Ron Baron, the billionaire investor, has been an outspoken Tesla bull. Baron's eponymous investment firm, with over $32 billion in assets under management, holds more than 1.6 million Tesla shares. They were purchased at an average cost per share of $219.02, according to the firm.  Baron said June 9, 2020, on "Squawk Box" that he believes "there's 10 times more to go" with Tesla. Source

Where is the stock going from here? Do you believe short-seller Jim Chanos? Or uber bull Ron Baron?

I made the call publicly, back in December 2018, Source. I made it again in February 2020, Source. I'm repeating it now:

"Buy on the dips when they happen. Tesla is heading higher. The Model Y will be incredibly popular and propel the stock to new highs."

Investor and Stock Guru, Richard Thalheimer is the founder and former CEO of the American consumer brand, The Sharper Image. Thalheimer now runs The Sharper Fund, a successful private fund. He is an expert in the field of investing who is sought after by journalists and their readers for his trendsetting observations about products, companies, and market movements.

Having been CEO of a NASDAQ listed public company, The Sharper Image, Richard has 20 years of experience with analysts and stock listings. Regularly evaluating concepts and products for The Sharper Image has given him a keen insight into what will succeed and grow, and what will not. He has spoken to analysts and reporters for over 20 years as a public CEO, this has taught him valuable lessons about how Wall Street analysts think, and when to actually have confidence in their judgment. As a result, today he is able to better predict which company's stock price will go up. This gives him an edge in investing and has resulted in superior portfolio performance.

Recent Podcast with Richard on Investing: