SHANGHAI, Aug. 4, 2020 /PRNewswire/ -- On July 30, Chinese game publisher Perfect World held an online press conference in Shanghai, at which Perfect World CEO Dr. Robert H. Xiao delivered a keynote speech during which he emphasized the importance of creative thinking as a vehicle to empowering the future. 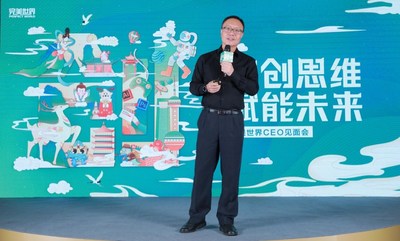 Perfect World recorded encouraging results across the board for the first half of 2020. The company's first flagship cloud-based title, Forsaken World, which went online in July this year, has taken the lead in the domestic market for cloud-based game distribution. From the launch of a cloud version of Subnautica in 2017, to the title of Forsaken World in the first half of 2020 and the cloud native game Jade Dynasty2  currently under development, Perfect World has kept expanding its presence in the cloud game sector by further enhancing efforts in the R&D of cloud games.

As the exclusive operator of DOTA2 and CS:GO in mainland China, Perfect World pioneered several online events this year, including the King of the Arena for public participation and the CS:GO Professional League formed exclusively for professional teams. Furthermore, the publisher has been active in creating virtual e-sports hosts, as part of an effort to consolidate its e-sports ecosystem. Looking forward, the firm plans to continue exploring possibilities to further apply AI technologies across the sector.

Perfect World launched ten TV series, two variety shows and one online film in the first half. Products including Perfect Village, We Are All Alone, Skate Into Love, And The Winner Is Love and Trident, all became huge hits in terms of both the number of comments and the audience rating.

Perfect World plans to release new titles including Fantasy New Jade Dynasty and Chronicle of Infinity in the near future. The company will continue to host CS:GO Professional League while launching an autumn city challenge and a national college league. In addition, the company is preparing for the production of several films and TV series, including The Glory and The Dream, an epic TV series celebrating the 100th anniversary of the founding of the Communist Party of China.

"Perfect World not only creates culturally-themed entertainment products that brings joy to the audience, but also continuously analyzes and breaks down the overall process of creating that joy into a series of thought processes and methodologies, which is something we refer to as 'creative thinking around culturally-based themes'," Dr. Xiao said. He further explained that such creative thinking is based on Perfect World's years of experience in implementing a strategy of developing games and entertainment that is centered around a creative approach to a country's or a region's cultural heritage, while the core lies in crossover integration, which empowers other industries with creative culture-based digital methods and experience.

Dr. Xiao then added that, through a combination of culturally-themed entertainment products, creative thinking around themes based on cultural heritage and the strategy of developing games based on those themes, Perfect World will continue to create high-quality content, constantly expanding the space for creative imagination and further growing its ecosystem, in a move to prepare for the future of creative development with its partners.