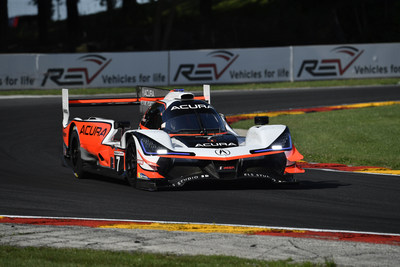 Acura Team Penske
Taylor hustled his #7 Acura ARX-05 to a time of 1:49.061 around the 4.0-mile Road America circuit, with teammate and defending series champion Cameron slotting in second, three-tenths of a second behind.  This is Taylor's 20th career pole in IMSA competition, and his second for Acura Team Penske, with the first recorded last year at WeatherTech Raceway Laguna Seca.

Taylor will start the #7 for Sunday's two-hour, 40-minute contest, once again co-driving with Castroneves, while Montoya will continue to share the driving duties aboard the #6 with Cameron.

In the #57 Heinricher Racing with MSR Acura, Misha Goikhberg qualified just over a tenth of a second slower in eighth, and will share with co-driver Alvaro Parente.  Till Bechtolscheimer rounded out the Acura GTD contingent in qualifying, and will start his Gradient Racing NSX GT3 Evo from 10th before handing off to co-driver Marc Miller in tomorrow's race.

Quotes
Ricky Taylor (#7 Acura Team Penske ARX-05) pole qualifier, first pole of 2020, 20th career IMSA pole: "It's been a great weekend for Acura Team Penske and it's nice to cement the strength of our ARX-05 prototypes in winning the pole position, and doing it in a 1-2 fashion. Both cars have been really fast this weekend. We kept swapping the top spot on the charts. Road America is a track that fits these cars so well, so we were hoping to come out of the box strong to get our season back on track a bit. We've done that to this point, but we need to continue to execute in the race the way we have so far this weekend."

Matt McMurry (#86 Meyer Shank Racing Acura NSX GT3 Evo) qualified seventh in GTD: "Qualifying went pretty well today, but we had pace to be further ahead than we ended up, Unfortunately I ran into traffic on what would have been my fast lap. We're trying to strategize for tomorrow. There's a strong chance of rain [tomorrow] and Mario [Farnbacher, co-driver] and I are both excited for that!"