JERUSALEM, July 29, 2020 /PRNewswire/ -- The Friends of Zion Museum hosted the Knesset Christian Allies Caucus for the relaunch for the 23rd Knesset, which was broadcast worldwide to millions of followers on social media. 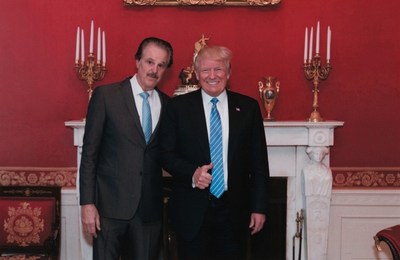 Prime Minister Benjamin Netanyahu said at the event: "Over the years, the Knesset Christian Allies Caucus has helped bolster the ties between Jews and Christians. My government remains dedicated to working together with our Christian friends from across the globe to further enhance the partnership between us, and I welcome this initiative in continuing to strengthen even further the bridge between Israel's Knesset and Christian leadership worldwide.

"Earlier this year, President Trump publicly launched his vision for peace. The American plan has the potential to overcome past failures by offering the Palestinians the path of peace and reconciliation and allowing us to reach the secure borders that Israeli governments have long sought. The plan also acknowledges that Jewish people are not foreign occupiers in Judea and Samaria, areas that are also an integral part of your Christian identity and of our common heritage."

US Secretary of State Mike Pompeo: "I am proud that the United States and Israel have never been closer than they are today. What we have accomplished over the last three years was almost unimaginable then, President Trump moved the US Embassy to Jerusalem, recognizing the reality that the holy city is and always will be Israel's capital. We recognized Israel's sovereignty over the Golan. I was honored to be in Jerusalem on the day that policy was announced. We told the truth, that Israeli civilian settlements in the West Bank are not per say inconsistent with international law. We've championed the President's vision for peace, it's the best and most realistic path forward to end the bloodshed between Israel and the Palestinian people, and to achieve enduring security, freedom and prosperity for both sides. There is one moment that I will never forget as a diplomat, as an American, and as a Christian ? praying at the Western Wall with the Prime Minister of Israel. It showed the strength of this alliance. The American Christian support for Zion is unshakeable and we are proud to stand by our brothers and sisters in Israel."

US Ambassador to Israel David Friedman: "We are in desperate need of unity. Israel faces challenges like never before. It is the only one nation that is still called upon to defend its right to exist, whether from the far right or the far left, whether from radical Shia Islamists to radical Sunni. People who cannot agree on anything else seem to find common ground in attacking, vilifying and ultimately seeking to destroy the Jewish state of Israel. But, Israel thank God is not alone, in the Christian community it has found true friendship, support and trust. Hundreds of millions of Christian Zionists now stand proudly with Israel and collectively deliver an important, an invaluable and unprecedented message. Simply put they say, 'Israel you are not alone'. Never underestimate the importance of Christian Zionism, they played an important role in Israel's creation, and it continues to play perhaps an even more important role today. The Friends of Zion Museum, founded by Dr. Evans, does a wonderful job in presenting this incredible phenomenon."

Dr. Mike Evans, founder and chairman of the Friends of Zion Museum, commented on the event and praised the importance of the KCAC and its efforts: "Last November, the Friends of Zion Museum inaugurated an innovative communication center with the most advanced technology, in order to bring Israel closer to the world, to as many people as possible, as we witnessed in the event  that took place today, which was broadcast to millions of followers on social media." Evans added, "Our goal is to inspire the next generation to continue this work in shaping the image of the State of Israel as a Jewish state. We were excited to host this event, which marks the Knesset's efforts to advance its ties with Christians around the world. We run a digital community that includes 73 million members on Facebook alone! This was the event of the year for Israel on social networks. "

The Knesset Christian Allies Caucus was established in 2004 and consists of 17 members of Knesset from 7 political parties. The caucus aims to build direct lines of communication between Knesset members and Christian leaders, organizations, and political representatives around the world.

Founded in 2006, The Israel Allies Foundation is dedicated to promoting communication between parliamentarians and legislators who share a belief that the State of Israel has the right to exist in peace within secure borders. Today, the IAF coordinates the activities of 43 Israel Allies Caucuses around the world.