GUATEMALA CITY, July 27, 2020 /PRNewswire/ -- On Tuesday June 16, both Fundación para la Libertad, based in Argentina, chaired by Gerardo Bongiovanni, and Fundación Internacional para la Libertad, based in Spain, chaired by Mario Vargas Llosa; jointly organized the webinar "Pandemic and Crisis in Central America". Several political, business and intellectual leaders from the region participated, such as Juan Sebastián Chamorro, executive director of the Civic Alliance, for Nicaragua; Dionisio Gutiérrez, President of Fundación Libertad y Desarrollo, for Guatemala; Enrique J. Egloff, President of the Board of Directors of the Chamber of Industry of Costa Rica and César Dargam, Vice President of the National Council of Private Enterprise, for the Dominican Republic. 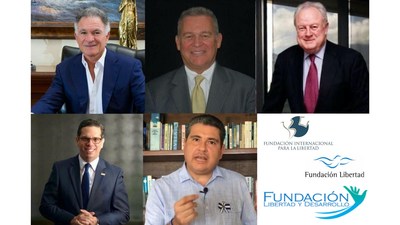 Dionisio Gutiérrez explained that "the pandemic is causing many deaths and causing great levels of suffering throughout the planet; it is forcing the governments to take drastic measures, sometimes wrong, sometimes disproportionate." Following this line of argumentation, he said that "the response of most governments was to follow the Wuhan model with confinements and paralyzed economies".

He continued with an assessment on the strategies adopted by Latin American governments: "This crisis is exposing the economic fragility and institutional weaknesses of the developed world. For Latin America, the consequences of the pandemic can cost decades of regression and devastation, economically and socially and, of course, also politically. The most serious thing about this crisis is that we are barely in the first minutes of the first half and halfway through the first wave of contagion. The WHO already said a few days ago that the number of new cases in the world is the highest since the start of the pandemic, especially in Latin America, were it is now the new epicenter of the pandemic".

On Central America, Dionisio Gutiérrez stated that: "Many of our countries closed prematurely and now that the virus has reached its exponential peak, our economies were already suffocated. In Guatemala, 70% of the economically active population works in informality, those are 5 million people who work in the morning in order to eat in the afternoon and represent 20% of GDP".