Hundreds of SF Union Members & Community Allies Stand United Against Systemic Racism and Cuts to Services, Call for a "Budget for All"

SAN FRANCISCO, July 20, 2020 /PRNewswire/ -- On Monday, July 20, hundreds of workers from a coalition of San Francisco unions and community allies are joining tens of thousands of workers in more than 25 cities nationwide in support of Black lives and a more just and equitable society. By protesting and rallying on the steps of San Francisco City Hall, we are demanding that Mayor London Breed take decisive action to address the triple threat of white supremacy, the COVID-19 pandemic, and our broken economy in her budget proposal due July 31. 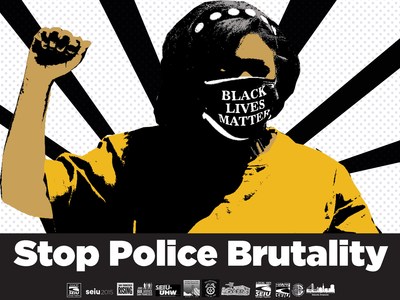 "In this country, racism and police brutality have taken the lives of countless Black Americans?our siblings, our parents, our friends, and our loved ones. These murders are but one manifestation the pandemic of racism has long inflicted on communities of color. Racism can also be felt throughout the criminal justice system, in our underfunded education system, in discriminatory housing systems, in the way ongoing environmental crises impact our communities, and in our workplaces and beyond," said SEIU 1021 President Joseph Bryant. "Here in progressive San Francisco, we have seen a sharp decline of African Americans in the City and County workforce while the Black population of our City has plummeted from over 13% to around 4% since the 1970s. Since the devastating pandemic began, many Black and Brown workers have risked their lives at the frontline and have kept the City running. We must fight to ensure these workers and communities are protected through this health and economic crisis and beyond."

All families deserve to thrive in a more just and equitable but until Black communities and other communities of color can thrive, none of our communities can truly thrive. As the pandemic rages, so does racial, class, and gender inequality. San Francisco is home to more billionaires per capita than anywhere else in the world, yet we are struggling to find the funds to pay for nurses, doctors, first responders, and other essential workers just when we need them the most.

"In addition to police violence, systemic racism under COVID-19 is disproportionately destroying Black and Brown lives across our country," said Gus Vallejo, President of IFPTE Local 21. "We must connect the dots between the inequities of this public health crisis and the austerity agenda we are up against today. We need a city that works for working people, not just billionaires."

Working people need San Francisco to work for us all?not just the wealthy and elite?but structural racism, corporate power, widening inequality, and the defunding of public services stand in the way. These challenges are all intertwined, and they all disproportionately harm communities of color and other vulnerable populations.

NATIONWIDE DAY OF ACTION
Nationwide, workers including fast-food, nursing home and janitorial workers are also on strike July 20. They are joined by thousands more who will take action in memory of George Floyd, Breonna Taylor, Elijah McClain and other Black people killed by police. We are demanding an end to the systemic racism that led to their murders and that also exists in our workplaces. Across the country, youth and climate activists will join in the actions to show the intersectionality of the fights for justice.

SEIU Local 1021 represents nearly 60,000 employees in local governments, non-profit agencies, health care programs and schools throughout Northern California, including 20,000 in San Francisco. SEIU 1021 represents more than half of all workers employed by the City and County of San Francisco; registered nurses and other healthcare workers at the city's hospitals, clinics, and jails; court workers, and nonprofit workers who provide care and support to the city's most vulnerable populations.

The International Federation of Professional and Technical Engineers (IFPTE) Local 21 represents more than 11,000 public service workers across the bay area, including more than 5600 employees of the City and County of San Francisco.  Learn more at www.ifpte21.org.