COLUMBIA, S.C., July 14, 2020 /PRNewswire/ -- Negative Exposure is a compelling, heart-wrenching story that introduces faith to audiences in a different way.  Previous films have dealt with racial and socioeconomic stereotypes, but no faith-based film has incorporated a "flipped society" that deals so directly with the dark side of life in order to reveal the light.  American history - the dark and the light - has had a significant and symbolic role in shaping attitudes within society.   Negative Exposure filmmakers want this film to be a "call to action" that sparks discussion built around issues in our society today. 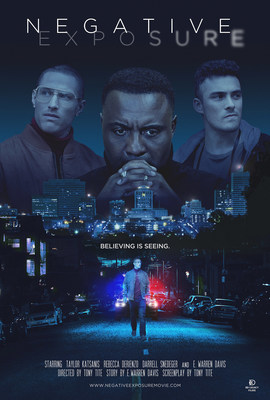 Filmed entirely in Columbia, South Carolina, from a story developed 8 years ago by Executive Producer Eric Warren Davis, of  E. D. Legacy Films,  Negative Exposure explores a community and residents navigating the atrocities of poverty, gang violence and police brutality.  "This is a unique film about the dark side of the American story, yet an amalgamation of many stories. It encapsulates situations currently happening in our country," said Davis who stars as Pastor Robert Kingsley, a man at odds with his own biases.  The screenplay, artfully crafted by Director Tony Tite, cleverly deals with issues of societal complexities while providing answers and solutions to today's racial, religious, and ethnic tensions.

This independent feature spotlights the talents of actors already creating a buzz with their hard-hitting, passionate performances.  Standouts include Taylor Katsanis, as Jayson Gresham, a struggling single father, and  Darrell Snedeger is dangerously intense and chilling as Bones, a community gang leader.  As Jayson's long-suffering mother, Rebecca Derienzo is compelling as a woman fighting to keep her son alive and thriving in a world stacked against him.

Partnering with the National Black Caucus of State Legislators (NBCSL), an organization representing more than 50 million Americans of various racial backgrounds, Negative Exposure is the "clarion call"-to-action initiated by more than 700 legislators who are NBCSL members.  Described as a "Parabolic Film," Negative Exposure uses life experiences to highlight spiritual principles.  The collaboration with the NBCSL goes one step further, adding to the list of expected outcomes for legislation to transform policing into a model that is equitable and safe for communities of color.

Negative Exposure will be available for download at www.negativeexposuremovie.com on August 8, 2020.