ST. LOUIS, July 14, 2020 /PRNewswire/ -- Approximately four out of five people (77%) released from prison are rearrested within five years ? a societal problem crippling communities and economies while subjecting justice-involved individuals and their families, especially those in the Black community who are disproportionately represented in our prison system, to a vicious cycle of poverty. 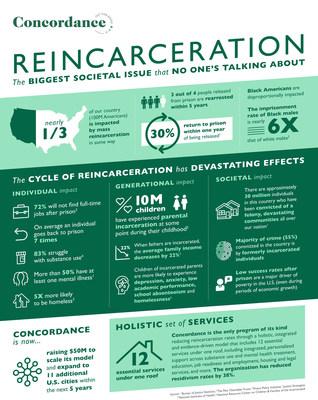 St. Louis-based Concordance Academy of Leadership is the only program of its kind reducing reincarceration rates ? also known as recidivism rates ? through a holistic, individualized, integrated and evidence-driven model that was developed in partnership with the Brown School at Washington University in St. Louis, one of the nation's most acclaimed schools for social work.

Concordance partners closely with participants throughout their 18-month journey in the program. The first step is healing the trauma the person endured. Participants then receive a comprehensive schedule of pre- and post-release services including personalized support across substance use and mental health treatment, education, job readiness and employment, housing and legal services, and more.

Through this model, Concordance has been able to reduce reincarceration rates from approximately four in five justice-involved individuals down to just two in five individuals. This impacts society through improved public safety, the economy by helping people return to the labor force, and families by ending generational cycles of incarceration and poverty.

"We have never seen a scalable program that's as comprehensive or effective at reducing reincarceration and helping people re-enter into society as Concordance," said national expert on evaluating re-entry programs, John Roman, Ph.D., senior fellow in the Economics, Justice and Society Group at NORC at the University of Chicago.

Today, Concordance announced the launch of the "First Chance campaign," a $50 million fundraising effort backed by prominent business and civic leaders to scale its model nationally and expand to 11 additional U.S. cities by 2025.

"With more than 100 million people directly or indirectly impacted, the perpetual cycle of reincarceration and the damage it creates is one of our society's biggest issues, yet also one most people don't know anything about," said Danny Ludeman, CEO and president of Concordance. "Over the last five years, we have developed a successful, holistic and evidence-driven approach that gives people their 'first real chance' ? healing them first so they don't commit crimes that send them back to prison. Now, we plan to scale this proven approach nationally."

With the imprisonment rate of Black males at nearly six times that of white males, this is a societal problem disproportionately impacting the Black community, devastating communities and keeping families in generational poverty. More than 10 million children have experienced parental incarceration in their lives; and children with an incarcerated parent are at least six times more likely to go to prison themselves. Leading the "First Chance" capital campaign to fund Concordance's national expansion is David Steward, chairman and founder of World Wide Technology, one of the largest minority-owned enterprises (MBE) in the world, with nearly $12 billion in annual revenues.

"The generational cycle of people returning to prison has enormous, negative impacts on all Americans, especially the family members of incarcerated people," said David Steward. "By addressing generations of trauma in the Black community, Concordance helps people released from prison achieve significant change and lasting success for themselves, their families and the community.  I am honored to join with Danny 'for a time such as this' to end the cycle and heal a national crisis."

Redefining re-entry from prison and giving people their first real chance at success is crucial for preventing the devastating cycles of incarceration and poverty that often span generations. This problem has led to the United States spending more than $80 billion annually on correctional supervision alone; and in most states, corrections spending is the second-fastest growing public expense.

With the money raised between now and the end of the year, Concordance will continue to work with a number of partners to develop a framework to evaluate potential expansion locations, targeting cities with the need, demographics, and policy landscape to best ensure continued success in dramatically reducing recidivism.

"We are taking a proven solution with demonstrated results in one place and expanding it to other cities throughout the nation," said Ludeman. "It is our hope ? and our expectation ? as we do, our families, communities and economies see real change to break the devastating cycles that have held people back for too long."

ABOUT CONCORDANCE ACADEMY OF LEADERSHIP

Concordance Academy is a St. Louis-based non-profit that offers the country's first set of integrated, holistic, and evidence-driven services to individuals returning to society from prison. Founded by President and CEO Danny Ludeman, the organization assists participants in three primary areas: behavioral health and wellness; education and employment; and community and life skills. The Academy starts working with individuals six months prior to release and continues assisting for up to a year after their return to the community. Concordance is committed to restoring individuals, rebuilding families, transforming communities, and advancing the field of re-entry services. For more information, visit www.concordanceacademy.org.

Founded by David L. Steward in 1990, WWT has grown to become a global technology solutions provider with nearly $12 billion in annual revenue. With thousands of IT engineers, hundreds of application developers and unmatched labs for testing and deploying technology at scale, WWT helps customers bridge the gap between IT and the business. By bringing leading technology companies together in a physical yet virtualized environment through its Advanced Technology Center, WWT integrates individually impressive technologies to produce game-changing solutions.

Based in St. Louis, WWT employs more than 6,000 employees and operates over 4 million square feet of warehousing, distribution and integration space in more than 20 facilities throughout the world.  For more information about World Wide Technology, visit www.wwt.com.