NEW YORK, June 7, 2020 /PRNewswire/ -- Standing at the "crossroads of the world" in New York City's iconic Times Square, in front of more than 15,000 protestors still grieving the death of George Floyd, the co-founders of Black Lives Matter Greater New York (BLMNY) offered a Blueprint for change and called on New York state legislators and members of Congress to end the slaughter of Black persons by the very institutions charged with protecting them. (30 minutes before the protest was slated to start, Mayor Bill de Blasio shut down pedestrian traffic to Times Square in an effort to stop the gathering. It was moved to 42nd and Broadway.) 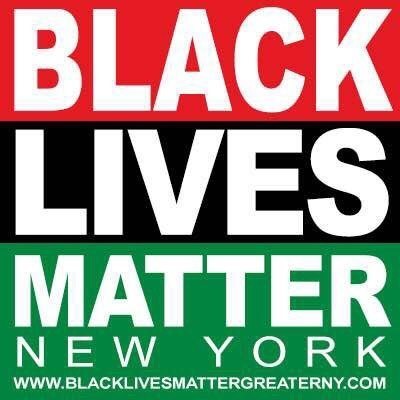 "We are centering Black Pain at the crossroads of the world," said Hawk Newsome, Chairperson of BLMNY. "What was once known as "The Great Whitey Way" will now be known as the Black Pathway. For tomorrow we lay the path to Black opportunity."

The legislative Blueprint, posted to the new Black Opportunities movement's website, is a policy platform to reform failed statutes and regulations to begin the long march of reform to a more civil and just society. Black Lives Matter is a global movement that successfully focused attention on state-sanctioned violence and anti-Black racism. The new Black Opportunities movement offers the next step on the path to Black liberation by providing educational and empowerment opportunities while preparing and training Black people to protect their own communities.

Drafted as a local, state and federal policy framework to advance solutions to build strong Black communities, and to end the institutional racism and militarized police state responsible for the unjustified killing of Black persons, the Blueprint includes policies that:

"This Blueprint is a call to action for those we've elected to office to serve us. Laws are created to provide structure for our society and institutions, but they must be changed when they no longer serve the welfare of the governed," said Chivona Newsome, BLMNY co-founder and candidate for Congress (NY-15). "For far too long our institutions have protected the abusers and victimized the innocent while trapping people of color in the quicksand of racism, poverty and despair."

"Today marks a new beginning, a beginning that mirrors the revolution of our great country's first days. The protests occurring here today in New York and around the world are symbols of our hope, power, and belief in a better and more just society," said Newsome. "As our nation's founding father Patrick Henry so famously proclaimed as he fought against the slavery of British rule, 'Give me liberty or give me death!' We've seen enough death. We now fan the flames of revolution and march onward to liberty."

About Black Lives Matter of Greater New York
Black Lives Matter of Greater New York aims to liberate our people at all costs. We want to have direct impact on polices that govern criminal justice, safety, education, jobs and other issues that are detrimental to the well-being of black communities across the New York City region. Through grassroots action, we will serve as a resounding voice for the underserved and disenfranchised. Visit us at www.blacklivesmattergreaterny.com and follow us on social media @BLMGreaterNY.

About Black Opportunities
Black Opportunities, created by Hawk Newsome and activist and actor Nick Cannon is the new path forward to liberate Black people from an oppressive government, end government sanctioned murder by the police, and offer educational and empowerment programs to prepare and train Black people to defend our communities. Learn more at www.blackopportunities.com.