HOLLYWOOD, Calif., May 27, 2020 /PRNewswire/ -- Louis the Child announced the winners of the #KR8atHome digital storytelling event.  Mr. Sourabh Patil (IG @shinzooooooo) from Goa, India won the grand prize and will receive an autographed, one-of-a-kind LTC created drawing and a $300 cash prize. "I was shocked when I saw the Instagram notification that Louis the Child mentioned me in their Instagram story!" says Patil.  The #KR8atHome paintONE Battle was a collaboration of Louis the Child and top digital avatar company Genies.com. 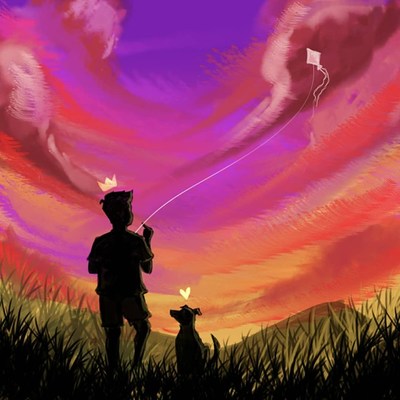 paintONE Battles is a competitive visual storytelling global sport where artists get twenty minutes to create a compelling digital art narrative, based on a random, two-word prompt: the "Little + Things" you appreciate in life right now in this locked down world. Louis the Child encouraged entries from both traditional and digital artists, so paintONE Battles received over 40 entries from all over the world, including traditional hand-drawn, watercolor, photobashing, and graphic design/special effects.

"We are floored by the creativity and artistic expression from all of the artists worldwide," says Freddy Kennett of Louis the Child. Robby Hauldren agreed: "We are talking next level skills. I was moved"!

The winning entry displayed a nostalgic, colorful rendering of a boy flying a kite, which was and is one of the little things Sourabh Patil enjoys. "After hearing Little Things, the first thing that came to my mind was flying kites, because as a child I was fascinated by kites, so that was my inspiration." The winning entry was created using Autodesk sketchbook, with Adobe Photoshop and iPad/Procreate also being used by the various artists.

ABOUT LOUIS THE CHILD
Louis the Child is a Chicago-bred production duo comprised of Robby Hauldren and Freddy Kennett. The pair just announced their debut album Here For Now and released brand-new track "Nobody Like You" with up and coming Australian singer-songwriter, Vera Blue. After landing three singles on the Hot Dance/Electronic sings chart in 2017, they delivered a series of exciting releases in 2018, including collaborations with artists like Joey Purp and Quinn XCII, as well as "Better not" ft. Wafia?a #1 hit on the US iTunes Electronic charts, featured on their EP Kids at Play. Also in 2018, Louis the Child scored the #58 spot on the first-ever Billboard Dance 100 artist rankings, then moved up to the # 46 spot on the 2019 list. Their most recent single, " Little Things" with Quinn XCII & Chelsea Cutler (Click HERE to watch) entered the Spotify US Viral Charts at #31 and has amassed over 10,000,000 streams worldwide, while their previous single "Every Color" with beloved alt-pop band Foster The People was hailed as a "psychedelic dance pop jam" with "sunny, electro-bass beat ready to soundtrack the trip from the drinks tent to the dance stage" by Billboard. While the pair continue to receive critical praise as they gear up for the release of their debut album, Louis The Child are proving they are a musical force to be reckoned with.
Media Contact: Michelle.Nemeroff@umusic.com

ABOUT GENIES
Genies Inc. is the leading avatar technology company (www.genies.com). With their consumer app, SDK and Avatar Agency, Genies has set the foundation for swift, widespread adaptation of avatars in society, business and culture and is pioneering the digital avatar landscape.
Media Contact: press@genies.com