WASHINGTON, May 7, 2020 /PRNewswire/ -- Today, some of America's most highly respected legal foundations and public policy institutes, as well as six California cities and current and former elected officials, filed amicus briefs at the U.S. Supreme Court encouraging the justices to take up Higginson v. Becerra (No. 19-1199), a challenge to the constitutionality of the California Voting Rights Act (CVRA).

The Pacific Legal Foundation, CATO Institute, Reason Foundation and the California cities of Mission Viejo, South Pasadena and Barstow, among others, contend that the CVRA is a violation of the Fourteenth Amendment's Equal Protection Clause and must be struck down.

Enacted in 2002, the CVRA essentially overturned a 1986 Supreme Court decision that narrowed the use of race and ethnicity in creating election districts. All of the amicus briefs note that the law makes racial considerations not just the dominant factor but the only factor in determining whether municipalities may use at-large electoral systems rather than district-based systems. Under the CVRA, the presence of racially polarized voting is sufficient by itself to find a municipality liable for vote dilution and, in turn, to bar that municipality from using at-large elections. And that municipality must switch to district-based elections as a result.

The amicus briefs recognize that the CVRA has forced an involuntary restructuring of local governments in California through the unconstitutional application of a racial criterion, and other states?such as Washington?have begun to adopt similar state voting rights acts of their own, modeled on California's. This has forced nearly 200 political jurisdictions across California to abandon their at-large forms of governance, some of which have been in place for over 100 years.

The Project on Fair Representation (POFR), a nonprofit legal foundation based in Arlington, Virginia, has provided counsel to Mr. Don Higginson, the former mayor of Poway, California who filed this lawsuit in 2017.

Edward Blum, the president of POFR, said, "This opinion from the U.S. Court of Appeals for the Ninth Circuit must be overturned."

Blum added, "This law drives racial-identity politics and leads to ? indeed, requires ? the creation of racially gerrymandered voting districts. All of this ultimately inhibits the creation of election districts and forms of governance in which the race and ethnicity of voters and their representatives become inconsequential." 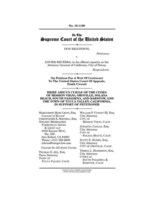 SOURCE The Project on Fair Representation