LOS ANGELES, April 27, 2020 /PRNewswire/ -- The best-selling film, The Trayvon Hoax: Unmasking the Witness Fraud that Divided America, is now available to watch on YouTube for free for a limited time. Director and producer Joel Gilbert describes this free offer as a "stay at home bonus." The Trayvon Hoax was first screened to the public at The National Press Club in Washington DC last September, and is also a book of the same name, available on DVD, Paperback and eBook on Amaz.com. 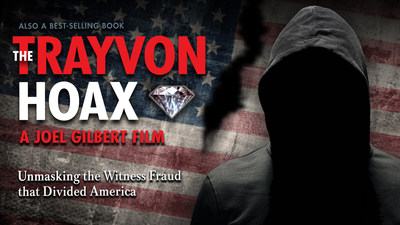 The Trayvon Hoax: Unmasking the Witness Fraud that Divided America, is a stunning work of investigative journalism. Hollywood filmmaker Joel Gilbert claims to reveal the true story of the 2012 shooting death of 17-year-old Trayvon Martin, a case that divided America. By examining Trayvon's 750-page cell phone records, Gilbert alleges that the key witness for the prosecution of George Zimmerman, Rachel Jeantel, was a fraud. He asserts that it was a different girl who was on the phone with Trayvon just before he was shot. She was the 16-year-old whose recorded phone conversation with family attorney Benjamin Crump ignited the public, swayed President Obama, and provoked the nation's media to demand Zimmerman's arrest. Gilbert's painstaking research takes him through the high schools of Miami, into the back alleys of Little Haiti, and finally to Florida State University where he finds Trayvon's real girlfriend, the real phone witness, Diamond Eugene. Gilbert confirms his revelations with forensic handwriting analysis and DNA testing. After obtaining unredacted court documents and reading Diamond Eugene's vast social media archives, Gilbert reconstructs the true story of Trayvon Martin's troubled teenage life and tragic death. In the process, Gilbert exposes in detail the most consequential hoax in recent American judicial history. The Trayvon Hoax was ground zero for the downward spiral of race relations in America. This incredible film and book have the potential to correct American history and bring America back together again.

George Zimmerman was inspired to launch a lawsuit based on the research in his documentary that is making its way through the Florida courts.