AUGUSTA, Maine, March 3, 2020 /PRNewswire/ -- According to the Centers for Disease Control and Prevention, suicide is the tenth leading cause of death in the United States and the ninth leading cause of death in Maine. On Tuesday, March 10, advocates from the Maine Chapter of the American Foundation for Suicide Prevention (AFSP), the largest suicide prevention organization in the United States, will meet with lawmakers to urge their support of LD 803, which would establish four regional crisis intervention centers to provide crisis intervention and psychiatric emergency services to persons living with substance use and/or mental health conditions. 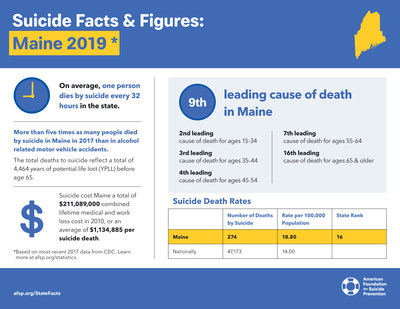 "I advocate in Maine as suicide is the 2nd leading cause of death for youth and young adults ages 10-34. I lost my 23-year-old daughter Ashley to suicide in 2013 and our family does not want to see any other families go through what we have gone through. Ashley had several life events in a 3-month period that contributed to a deep depression and she lost her will to live. If we were educated on the signs of mental health crises and suicide we might have been able to get her the help she needed and to save her life. Our mission now is to try to bring educational programs into our schools and places of business to help reduce the rate of suicide here in the state of Maine.  We hope to save lives and bring hope to families like ours who are affected by suicide," said Margie Johnston, AFSP Maine Chapter Field Advocate and Survivor Outreach Coordinator.

The AFSP Maine Capitol Day is a special day for all who have a connection with or a personal story around the topic of suicide. Attendees will meet with their legislators to share their stories about why they participate in this advocacy effort, giving a human face to this important public health problem. Advocates hope that by sharing their stories, they will help lawmakers understand that investments in mental health and suicide prevention can save lives.

AFSP Maine Chapter advocates are part of a larger national movement of AFSP volunteer advocates who will visit state capitols across the United States in 2020 to bring best practices in suicide prevention to legislators and their staff. To learn more about AFSP's advocacy efforts, visit here: https://afsp.org/our-work/advocacy/.

The American Foundation for Suicide Prevention is dedicated to saving lives and bringing hope to those affected by suicide. AFSP creates a culture that's smart about mental health through education and community programs, develops suicide prevention through research and advocacy, and provides support for those affected by suicide. Led by CEO Robert Gebbia and headquartered in New York, with a Public Policy Office in Washington, D.C. AFSP has local chapters in all 50 states and the District of Columbia with programs and events nationwide. Learn more about AFSP in its latest Annual Report, and join the conversation on suicide prevention by following AFSP on Facebook, Twitter, Instagram, and YouTube.