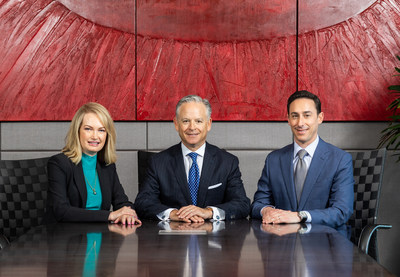 The new firm -- Ratzan, Weissman and Boldt ? combines the skills and expertise of trial attorneys Stuart N. Ratzan and Stuart J. Weissman of the Miami-headquartered Ratzan Law Group, with Kimberly L. Boldt, an appellate attorney based in Boca Raton. Headquartered in Miami with offices planned for Fort Lauderdale and Boca Raton, Ratzan, Weissman and Boldt form a proven alliance dedicated to advocacy for patients, families and consumers who have suffered catastrophic personal injuries or death due to the wrongdoing of others.

Ranked twice among the "Top Verdicts of 2017," Stuart N. Ratzan was lead trial lawyer securing a $46.5 million medical malpractice verdict ? the largest ever in the State of Arkansas ? for a three-year-old child who suffered brain damage after she was left untreated for jaundice as a newborn; and also lead trial lawyer in a $45 million verdict involving the death of a medical student following a late-night crash at an Interstate 75 construction site in Pembroke Pines, Fla.

Ratzan made headlines last year as lead trial lawyer on behalf of a Tampa, Florida wife and mother whose 1996 lung cancer death resulted in a $42.5 million verdict against cigarette companies R.J. Reynolds and Phillip Morris.. The national recognition comes on the heels of the firm representing a whistleblower who obtained a $2.8 million verdict  in a lawsuit against a major Florida hospital corporation.  The jury found that the hospital retaliated against the whistleblower by terminating him for objecting to and exposing a multitude of dangerous actions on the part of a transplant surgeon.  The jury verdict enforced Florida's patient safety laws.

Stuart N. Ratzan was feted by the Daily Business Review as one of the "Most Effective Lawyers of 2018" for his representation in personal injury litigation. He also has been recognized annually as one of the top attorneys in Florida by South Florida Legal Guide, Florida Trend Magazine and Super Lawyers. The University of Miami School of Law graduate boasts an AV rating from Martindale-Hubbell, the gold standard for legal ability and ethical standards.

Weissman, who joined Ratzan Law Group as an associate in 2008 after graduating from the University of Michigan and then earning his J.D. from Stetson University College of Law, has been recognized in the Daily Business Review and other outlets for his trial work involving multi-million dollar verdicts obtained throughout the country on behalf of his clients. "Stuart Weissman has proven himself to be an elite trial lawyer, passionately devoted to his clients and to the power of our court system to deter unsafe conduct ? whether it be in the hospital, on the roadway, or in the corporate boardroom," said Stuart N. Ratzan.

About Ratzan, Weissman and Boldt
Ratzan, Weissman and Boldt is a boutique trial practice dedicated to building and retaining a safe society through diligent and sophisticated advocacy in catastrophic injury, medical malpractice, product liability and commercial cases. The firm's attorneys champion cases against powerful interests to hold insurance companies, hospitals, manufacturers, doctors and corporations accountable for the harm they cause others. For additional information, call (305) 374-6366 or visit https://rwblawyers.com/. Connect via Facebook, Twitter, and LinkedIn.