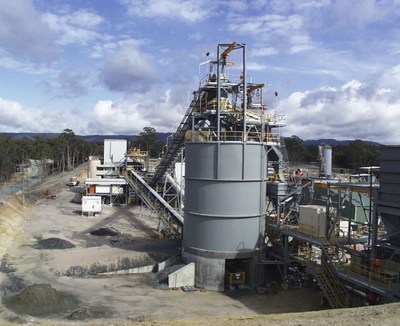 London listed NQ Minerals Plc (NEX: NQMI) (OTCQB: NQMLF), the base and precious metals producer from its flagship Hellyer Gold Mine ("Hellyer") in Tasmania Australia, is pleased to advise that it has entered into agreements with the mortgagee in possession of the relevant assets to purchase the Beaconsfield Gold Mine in northern Tasmania. Beaconsfield is located 200 km from NQ's current Hellyer base and precious metals operations.

"As from today, NQ and its engineering consultant teams commence an extensive due diligence programme on Beaconsfield as part of the acquisition agreement. NQ will be working with its consultants and relevant Government Departments in Tasmania to assess and ascertain what is required to re-open Beaconsfield as soon as possible.

"Acquiring an established gold processing plant for a fraction of the cost to build and permit a new one, not to mention the typical lead time associated with permitting a new facility in Tasmania, is an exciting opportunity which provides our shareholders with exposure to the potential near term re-opening of a high-grade gold operation in Tasmania. Recent notable successes in re-assessing new potential around historic high-grade gold mining centres has seen significant value add for investors at projects like Fosterville in Victoria and Bellevue in Western Australia. In this regard, we believe that Beaconsfield offers a genuine opportunity for the Company to develop a high-quality gold asset.

"Furthermore, the opportunity to bring Beaconsfield back into operation reinforces and builds on NQ's existing activities, commitment to, and strategy in Tasmania. This project will leverage off the skills and experience developed during the successful fast track recommissioning and operation of the Hellyer Gold Mine and complement the development of the Barnes Hill nickel and cobalt mining and processing project. In particular the close location of the Barnes Hill project to Beaconsfield will enable shared capital and operating costs reducing the implementation timelines and costs for both opportunities."

Historic gold production at Beaconsfield's Tasmania Mine was in two main phases:

As part of the initial programme of works in assessing the potential to re-open Beaconsfield, NQ will be engaging independent consultants to re-assess the existing gold resources available within the mining lease, taking in to consideration the 50% increase in A$ gold price since the mine officially ceased underground operations in 2012.

However, it should be noted that prior to Beaconsfield's operator, BCD Resources NL ("BCD"), closing the underground mine on the 30 June 2012, BCD stated in their June 2011 Annual Report that underground reserves and resources at its Tasmania Mine totalled 336,514 ounces of gold (Refer Table 1). Sizeable unmined areas remain within the existing mine envelope and the gold mineralisation is open at depth.

In the full year to 30 June 2012, the Mine's last year of underground production, output was 246,084 tonnes at 6.5 g/t gold with plant recoveries averaging 86.9%. This resulted in 44,829 ounces of gold production for the year at an average operating cost of A$1,027 per ounce. The processing plant ceased treatment of gold ores in 2013 after treating surface stockpiles and has been in care and maintenance since then.

Significant drill intersections have been made below 1210m (the lowest mine working level at the time of closure) down to a depth of 1360m, illustrating the potential of further ore to depth, these include:

The total consideration for the acquisition is A$2 million, paid as follows:

The balance of the purchase price which remains payable following settlement will be secured including by way of a charge over the assets which are the subject of the acquisition.

Completion of the transaction is conditional upon normal regulatory approvals being obtained by 30 June 2020, including the consent of the Tasmanian Government to the transfer of the relevant mining leases to NQ.