NEW YORK, Feb. 21, 2020 /PRNewswire/ -- Alex Mill, originally launched in 2012 by Alex Drexler with a tiny storefront on Elizabeth street in Nolita, opens a new (significantly larger) shop, just blocks away, at 70 Mercer. With a reinvention last year, and a new founding partner (Madewell and J.Crew's former design lead Somsack Sikhounmuong) interest in the brand has grown. So much so, they opened a pop-up on Greene Street last June; a more central location became an inevitability. 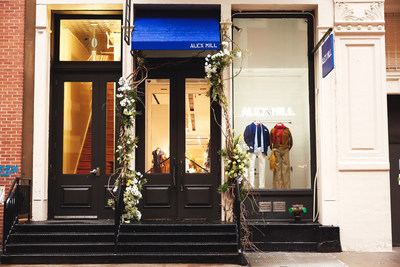 Under the leadership of Alex, Somsack and the line's godfather of sorts (Alex's dad and Somsack's mentor) Mickey Drexler, the new space includes a just-launched spring collection and lots of personality. The clothes are what you might expect from a trio with such a pedigree. Previously J.Crew and Madewell CEO (not to mention former CEO of Gap and founder of Old Navy and  Madewell) Mickey brought Somsack and Alex together nearly two years ago and the partnership has paid off: Alex's vision for a company revolving around a perfect shirt and Somsack's ability to create just that has merged into a collection of exciting and equally easy-to-wear clothes.

"It's so important that people see, touch, and try on our clothes in person.  So much of what we do is about the warmth of a wash, the way fabrics feel and how a color looks in new lights, the way it fits and how someone feels in something when they put it on. I learn something each time I talk with a customer."
- Somsack Sikhounmuong, Co-Founder

"We're really happy with the early momentum around the reimagined Alex Mill since we launched last February.  This store is one element of our expansion plan, and we're excited to keep growing and take Alex Mill to the next level."
- Alex Drexler, Co-Founder