MONTRÉAL, Feb. 20, 2020 /CNW Telbec/ - The Fonds immobilier de solidarité FTQ is teaming up once more with Devimco Immobilier, this time on the MAA Condominiums and Penthouses project in Montréal's Golden Square Mile neighbourhood. Located on Peel Street, between Sherbrooke Street and De Maisonneuve Boulevard, the 34-storey building will be built directly above the MAA Sports Club, a well-known heritage building in Montréal. The $160 million project features refined, contemporary architecture that combines glass and the finest materials to showcase the facade of the existing building, which will also be restored. Construction began in October and the 300 condos are slated for delivery at the end of 2022. 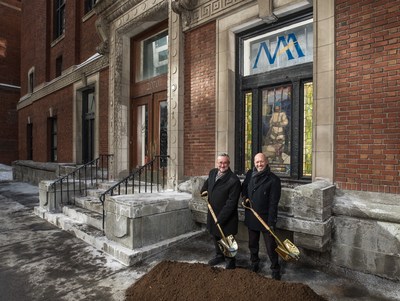 "The MAA development has tremendous appeal because of its location in a sought-after neighbourhood where exceptional condo projects are sprouting and attracting many buyers. The immediate neighbourhood has high-density buildings with architectural interest and tremendous heritage value. The large-scale project is also great for job creation and will ultimately generate 1,100 jobs."
Normand Bélanger, President and CEO of Fonds immobilier de solidarité FTQ

"We're proud to have this opportunity to showcase urban heritage with the MAA project and at the same time revitalize the iconic MAA Sports Club. MAA's residents will be mostly professionals who want to live close to work and enjoy the neighbourhood's lively "live, work, shop, play" environment, which includes close proximity to Parc Mont-Royal. At every step of the way, we made sure the MAA project respected the memory and spirit of this rich historic neighbourhood."
Marco Fontaine, Vice-President development, sales and marketing at Devimco Immobilier

Club membership will include the following services:

Devimco Immobilier is a Québec real estate development leader that stands out for the creation and execution of large real estate projects, in particular lifestyle and TOD (transit-oriented development) complexes that combine commercial, business, leisure, and housing components. The company's real estate projects are noteworthy for producing unique living environments that take the needs of the people in the community into account.

Since 2005 Devimco Immobilier has been developing District GriffinTM a vibrant area where a genuine community is taking root. Other projects include SOLAR UNIQUARTIERTM, the largest (TOD) project in Québec, a $1.5 billion development that will become a South Shore hub at the northwest intersection of highways 10 and 30.

Devimco Immobilier is also building Square Children'sTM, a new flagship project revitalizing the former site of the Montréal Children's Hospital and the entire neighbourhood. The developer will also begin construction this year on the MAA Condominiums & Penthouses, on Peel Street in downtown Montréal, a project as rich as the history of the MAA Sports Club whose revitalization will be part of it.

The Fonds immobilier de solidarité FTQ promotes economic growth and employment in Québec by strategically investing in profitable and socially responsible real estate projects in partnership with other industry leaders. The Fonds immobilier backs residential, office, commercial, institutional and industrial projects of all sizes across Québec. At December 31, 2019, the Fonds immobilier had 56 projects under construction or development with a combined value of $3.6 billion in progress that will create some 30,000 jobs, along with 74 properties under management, 1.3 million square feet of land slated for development and $90 million invested in affordable, social and community housing. The Fonds immobilier is a member of the Canada Green Building Council. 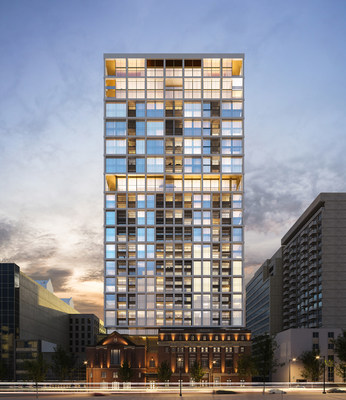