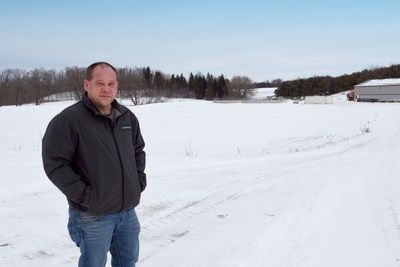 The NWMO signed agreements with landowners in South Bruce, Ont., that will allow sufficient access to land for studies at a potential deep geological repository location. The community is one of two potential host areas that remain in the site selection process for the project; the NWMO announced in November 2019 that studies are also continuing in the area of Ignace, Ont.

The Township of Huron-Kinloss, Ont., will no longer be considered a potential host for the project; however, as a neighbour to South Bruce, the community will continue to play a strong role as activities continue.

"We are heartened by the strong interest shown by local landowners in each municipality," said Dr. Mahrez Ben Belfadhel, Vice-President of Site Selection at the NWMO. "With agreements in place and access to land in South Bruce, we expect to begin studies such as borehole drilling and baseline environmental monitoring in the coming months to assess the suitability of the area."

"I was born and raised in this community, and my family and I are proud to call South Bruce home," said local farmer and landowner Darren Ireland, who entered into an agreement with the NWMO. "We understand that this project has the potential to bring long-term benefits to the area, and we want to be part of building a sustainable, prosperous community for everyone now and in the future."

The land access process was initiated in May 2019. Since then, the NWMO worked with local landowners, including Mr. Ireland, to aggregate nearly 1,300 acres (526 hectares) of land northwest of Teeswater, Ont. The agreements include a combination of option and purchase arrangements that allow the NWMO to conduct studies and landowners to continue using the land, in some cases through leaseback arrangements. If the site is selected to host the repository, the NWMO would purchase the optioned land.

"The identification of a potential repository site in South Bruce is an important milestone for Canada's plan, providing confidence that the organization can proceed with technical site evaluations and social studies in this area. This is the result of months of hard work and effort on behalf of the municipalities, local landowners and the NWMO," said Dr. Ben Belfadhel. "Canada's plan has been made stronger through the thoughtful and constructive contributions of the people and leaders in the area."

The NWMO will continue discussions with landowners in the vicinity of the potential site over the coming months and years to further aggregate additional land in this area to form a site of approximately 1,500 acres (607 hectares). Canada's plan calls for the NWMO to identify a single, preferred site to host the project, in an area with informed and willing hosts, by 2023.

While the NWMO continues to engage with Saugeen Ojibway Nation, other Indigenous communities, and local municipalities, the aggregation of land in South Bruce does not suggest it has provided its support for the siting of the repository in this area.

The Nuclear Waste Management Organization (NWMO) is implementing Canada's plan for the safe, long-term management of used nuclear fuel. Used nuclear fuel is currently safely managed on an interim basis at existing nuclear generating stations in Canada; however, this is not a long-term management approach. The organization was created in 2002 by Canada's nuclear electricity producers. Ontario Power Generation, NB Power and Hydro-Québec are the founding members, and along with Atomic Energy of Canada Limited, fund the NWMO's operations. The NWMO operates on a not-for-profit basis and derives its mandate from the federal Nuclear Fuel Waste Act.