Le Lézard
Classified in: Business, Sports and recreation
Subject: PER 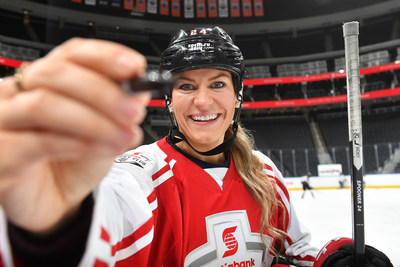 "We believe that Natalie exudes the important values that hockey teaches, such as respect, teamwork, inclusivity and dedication," says Mike Tasevski, Vice President, Sponsorship at Scotiabank. "We are confident that Natalie's passion for the game will continue to inspire the next generation of female hockey players to pursue their own hockey dreams, and we are proud to welcome her to the Scotiabank team. Scotiabank is committed to supporting every goal on and off the ice and have supported one million kids and counting since 2018 through the Scotiabank Community Hockey Sponsorship Program."

Natalie is a two-time Olympic medallist and has played in seven IIHF Women's World Championships, winning one gold, five silver and one bronze as part of Canada's National Women's Team and is a member of the PWHPA . She joins Scotiabank's roster of Teammates, which includes, Auston Matthews, P.K. Subban, Cassie Campbell-Pascall, Lanny McDonald, and Darcy Tucker. Scotiabank Teammates act as ambassadors at sponsored events throughout the year and are featured in Scotiabank's marketing campaigns.

Natalie is familiar with Scotiabank's commitment to kids' community hockey, as she has been a guest ambassador at past Scotiabank Girls HockeyFest events, and has traveled with Scotiabank and Canadian charity Project North, to deliver hockey equipment to communities in the Arctic.

"I'm so excited to be on Team Scotiabank alongside some amazing hockey players who I looked up to growing up and love to watch now," says Spooner. "I have seen first-hand the impact Scotiabank has made in communities across Canada through Scotiabank Girls Hockey Fest and Project North. I am so proud to partner with Scotiabank as they continue to invest in growing women's hockey around Canada so that every little girl can dream big for their future."

At Scotiabank, we believe hockey teaches kids values and lessons that they can use outside the arena, and for the rest of their lives. Helping kids succeed on the ice means helping them succeed everywhere. Hockey matters to Scotiabank because it matters to Canadians. We are proud fans, coaches and players.

Scotiabank continues its commitment to supporting communities and bringing fans closer to the game, with the 20th annual Scotiabank Hockey Day in Canada®, taking place in Yellowknife, Northwest Territories, February 5-8.  The festivities will culminate on Saturday, February 8th with a 12-hour broadcast, featuring all seven Canadian NHL® teams. The broadcast starts at 1 p.m. ET/10 a.m. PT on Sportsnet, Sportsnet ONE, CBC, and Sportsnet NOW. All matchups will also air on NHL Live.

In December, Hockey Canada announced Scotiabank as a new International Marketing Partner and the Official Bank of Hockey Canada. The five-year agreement will promote women's hockey and support of community hockey, creating more ways for kids to play the game. Additionally, Scotiabank will be the presenting sponsor of the Hockey Canada Community, an online destination to share and celebrate great Canadian hockey stories.

Don't forget, this spring, Hockey 24 will be released! Canadians are encouraged to watch to see if they can spot themselves on the silver screen, TV and online following a world premiere screening taking place during Hot Docs Canadian International Documentary Festival in Toronto. In November 2019, Canadians were asked to submit their photos and video highlighting their personal experiences with community hockey. Documentary filmmakers are busy compiling the contributions submitted from Canadians across the country to create a unique snapshot of life on a single day in Canada, known as Hockey 24.

About Scotiabank Hockey
Scotiabank is the Official Bank of the NHL®, NHL Alumni, Toronto Maple Leafs (who play at Scotiabank Arena), Winnipeg Jets, Calgary Flames (who play at the Scotiabank Saddledome) and Edmonton Oilers, and it also supports the Montreal Canadiens. Scotiabank's Community Hockey Sponsorship Program has supported over one million kids and counting through its involvement with minor hockey teams in communities across Canada, since 2008. To find out more about Scotiabank's hockey programs, please visit ScotiabankHockeyClub.com or through social media on Instagram, Facebook and Twitter.

"NHL and the NHL Shield are registered trademarks of the National Hockey League. © NHL 2020. All Rights Reserved."