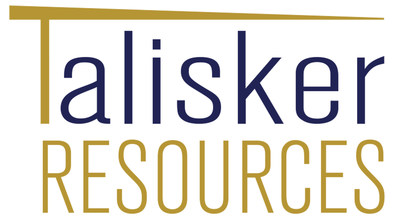 There were no reservations in the Former Auditor's audit report for the relevant period, being the two most recently completed financial years ended December 31, 2018.  In accordance with National Instrument 51-102 ? Continuous Disclosure Obligations ("NI 51-102"), the Company has filed a Change of Auditor Notice (the "Notice") on SEDAR together with letters from both the Former Auditor and Successor Auditor, with each letter confirming agreement with the statements contained in the Notice.  There were no reportable events as defined in NI 51-102 between the Former Auditor and the Company.

In other news, the Company has entered into a purchase agreement for the Big Sheep Project comprising two mineral claims totaling 162.6 hectares for a cash payment of $40,000 and the issuance of 250,000 common shares of Talisker. With this acquisition, Talisker's hectares in the Spences Bridge Gold Project have increased to 193,566.9 hectares.

Talisker Resources Ltd. is a junior resource company involved in the exploration of gold projects in British Columbia, Canada. Talisker's projects include the Bralorne Gold Complex, an advanced stage project with significant exploration potential from a historical high grade gold producing mine as well as its Spences Bridge Project where the Company holds ~85% of the emerging Spences Bridge Gold Belt and several other early stage Greenfields projects. With its properties comprising 272,093 hectares over 288 claims, three leases and 154 crown grant claims, Talisker is a dominant exploration player in the south central British Columbia. The Company is well funded to advance its aggressive systematic exploration program at its projects.

Neither the CSE nor its Regulation Services Provider (as that term is defined in the policies of the CSE) accepts responsibility for the adequacy or accuracy of this release. No stock exchange, securities commission or other regulatory authority has approved or disapproved the information contained herein.