CORPUS CHRISTI, Texas, Jan. 17, 2020 /PRNewswire/ -- Alex Hilliard, an attorney with Texas based law firm Hilliard Martinez Gonzales LLP, recently filed a lawsuit on behalf of the family of an airline employee who was killed while working at the Charlotte Douglas International Airport. HMG represents the family of the victim, Kendrick Darell Hudson, in the action against American Airlines, Inc. and The City of Charlotte for allowing hazardous conditions to endanger those working on and around the ramps in Concourse E of the airport. 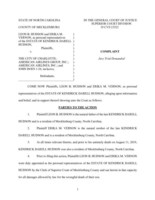 Mr. Hudson was killed on August 11, 2019 as he transported luggage in the unlit area of the ramp outside Gate E3. The dim area outside the E Concourse prevented Mr. Hudson from seeing a piece of fallen luggage laying on the ground directly blocking his path. When the 24-year-old airline employee approached the obstruction he turned the luggage tug in an attempt to avoid colliding with the luggage. Unfortunately, the feeble lighting on the ramp prevented Mr. Hudson from seeing the luggage early enough to safely maneuver around it. Mr. Hudson's vehicle collided with the luggage and flipped over, crushing him beneath its weight.

"There is a needless and preventable danger being ignored by American Airlines as employees continue to put their lives in jeopardy. American Airlines knew of the inadequate lighting, and the danger it presents to all those working in the area, yet they chose to stick their head in the sand, as Mr. Hudson and other personnel continued to work in dangerous conditions. The inadequacy of the lighting created hazardous conditions that many airport personnel reported prior to Mr. Hudson's death."

The U.S. Occupational Safety and Health Administration opened an investigation into the accident and focuses on the adequacy of lighting in the area surrounding Gate E3 as well as other areas around the E Concourse.  For some time, baggage handlers and other airport employees have complained of near-pitch-black conditions around the E Concourse. Workers considered the unsafe conditions surrounding Gates 30-38 so shockingly dangerous they began referring to the area as "Death Valley."

During her testimony, Prophete noted that inadequate lighting on the tarmac, a concern repeatedly raised by her local with Piedmont management, likely led to the tragic death of Charlotte ramp worker Kendrick Hudson in August, 2019. The tug Hudson was driving hit a piece of baggage that had fallen on the tarmac, causing the tug to flip over.

Prophete also presented the Piedmont Safety Report to the subcommittee, which highlights the widespread safety problems at Charlotte Douglas Airport. The Report states severe understaffing and failures by management to address safety hazards increase the risk of injuries and deaths. Despite repeated instances of CWA local union and airport agents raising safety concerns about the lighting to airport management and executives of American Airlines and The City of Charlotte management prior to Hudson's death, no action has been taken to fix the lighting issue.

The Piedmont Safety Report also cites to a new survey of nearly 500 Piedmont agents across the country, with a focus on Charlotte Douglas International Airport.

According to CWA, the insufficient lighting hazard had been raised at various "Roundtable" meetings over the past two years that the airlines set up to hear about agents' concerns.  The insufficient lighting hazard had also been raised by Vice President of CWA, Donielle Prophete, and other members of the local union's Executive Board at the monthly department meetings with airline and city management.

CWA has requested the airline make the following changes to ensure worker safety: