Hip And Healthy Fast Casual Mexican Concept, Guzman y Gomez, To Open Its Doors To First U.S. Drive Thru In Naperville On January 16

NAPERVILLE, Ill., Jan. 14, 2020 /PRNewswire/ -- If you haven't yet heard of Mexican restaurant chain, Guzman y Gomez, you're about to! Guzman y Gomez is one of the most exciting food brands to hit the U.S., and the Chicago suburb of Naperville has been chosen to launch the first GYG flagship drive thru restaurant in North America, which is the 135th GYG restaurant globally. 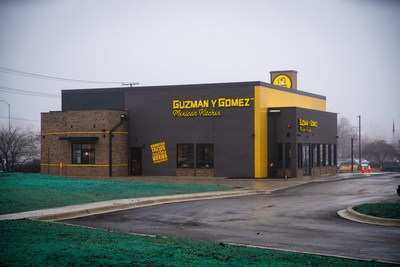 A Mexican chain like no other, GYG ? as it's known around the world ? is a combination of fast-food with drive thru, and fast casual dining. This is GYG's point of difference, serving real, made-to-order Mexican food using fresh, whole produce and authentic ingredients and GYG's culture, speed, innovation and convenience are at the core of the business. GYG is redefining fast food by showing it's possible to serve good food, fast, without compromising on nutrition. In 2019, after three years in the making, GYG announced that its food is 100 percent clean, enabling guests to enjoy GYG knowing it contains no added preservatives, artificial flavors, added colors or unacceptable additives.

GYG is about to give Naperville their Mexican fix any way you want it. The new drive thru, located at 1519 North Naper Boulevard, features GYG's mouth-watering menu serving breakfast, beginning at 6am, lunch and dinner ? served late. GYG's burritos, bowls, tacos and nachos come in both regular and mini sizes, giving its guests more options and variety than other fast casual restaurants. Additionally, guests will be able to dine in, take away, drive thru or have GYG delivered for optimum flexibility.

Using superior ingredients delivered into restaurants and prepared fresh daily, GYG's menu and breadth of choices offer an entirely new Mexican dining experience. At GYG, crowd favorites include the Burritos and Chipotle Seasoned Fries, while the Nacho Fries are something everyone should try at least once.

Naperville residents now have access to the most awesome breakfast and barista-made coffee which can be conveniently ordered from the GYG drive thru on the way to work or school. GYG has a delicious selection of made-to-order breakfast items served daily, from a Chorizo Breakfast Burrito to Avocado on Toast, perfectly complemented with their barista made coffee.

While GYG will quickly become known for its passion for high-quality food and incredible energy, it's also how quickly your food is prepared that is truly unique. GYG has one of the fastest restaurant operating platforms in the world, making over 750 fresh, made-to-order burritos per hour at record pace for hungry diners, getting you in and out in mere minutes. The speed of this operation has to be seen to be believed and only exists due to GYG's energetic culture and dedication of its crew.

Guzman y Gomez was founded in 2006 by Steven Marks and Robert Hazan, two native New Yorkers who moved to Australia and had a craving for quality Mexican food, but couldn't find it anywhere. Since then, GYG has captured the attention of Australia, Singapore and Japan, with 135 restaurants including a substantial network of drive-thrus. The team has also touched the sky, being the first commercial partner to deliver burritos by Drone with Google Wing in Australia's capital city, Canberra.

"We both grew up in New York and it's always been our dream to bring the brand back to the U.S. We have looked at sites all over the U.S. for a number of years, and we were really particular about it because we knew our first restaurant in the U.S. had to be special. We intend on opening hundreds, if not thousands of GYG locations across the U.S. and, while this won't be our last, I want our very first in Naperville to be the one everyone knows about and visits," said Marks. "We chose Naperville because of the community. We kept hearing about this city, which is ranked as one of the best places to live in the U.S. and the moment we arrived here and saw the site, we knew this was where our first U.S. drive thru restaurant had to be."

Guzman y Gomez will open its doors on Thursday, January 16, 2020 with hours of operation from 6am to 10pm, seven days a week. Stay up to date on details at the Guzman y Gomez website and Facebook page, and join the conversation on Instagram, @GuzmanYGomez.