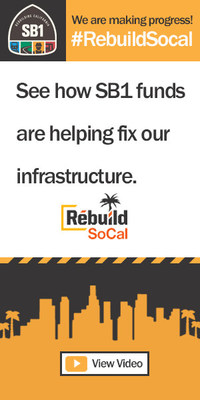 Every video in the SB1 series features a different project currently underway in Southern California: Adelanto, North Coast Corridor, La Quinta and Southgate. Every one of these projects are a reminder of how these dollars are being used to improve the lives of everyday Southern Californians.

Senate Bill 1 (SB1), the Road Repair and Accountability Act of 2017, was signed into law in April of 2017. This legislative package invests $54 billion over the next decade to fix roads, freeways and bridges in communities across California and puts more dollars toward transit and safety.

The video series was created to educate the public on the practical, real-world benefits of SB1 construction projects. For example, the Southgate project is adding ADA ramps for residents while the North Coast Corridor project has added several hundred acres of preserved coastal habitat.

The ads will give the readers of these newspapers a chance to view these educational videos for themselves. All will link back to the SCPFJ website where all four videos can be viewed at once.

"We believe it is important for residents of Southern California to truly see how their SB1 dollars are being spent," said SCPFJ Executive Director, John Hakel. "These videos were created to demonstrate how these projects are not only eco-friendly but are improving the surrounding communities as well."

To learn more about how your SB1 funds are being spent please visit: https://rebuildsocal.org/sb1/projects/

ABOUT SOUTHERN CALIFORNIA PARTNERSHIP FOR JOBS

To learn more about the Southern California Partnership for Jobs please visit www.rebuildsocal.org.