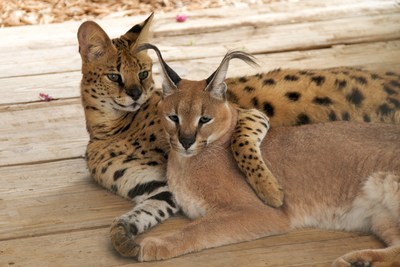 Visitors who come expecting to hear leopards roar leave with knowledge that the nine species living there also purr, squeak or chirp. The tours inform visitors about threats from habitat loss and poaching, and encourage learning about preserving natural environments.

Some of the cats are socialized enough that visitors can book a personalized interaction with various species. During interactions, a guest accompanied by a keeper is allowed to spend 15 minutes in the enclosure with serval, caracal or clouded leopard cubs.

Large cats were worshipped with religious fervor in ancient Egypt, where killing or neglecting them was considered a crime. Not so in America, where neglected or confiscated cats abound. An abuse situation led to the rise of Panther Ridge in 2003, when Florida resident Judy Berens was granted a license to take in a small, illegally held ocelot that had been confiscated by the state. Another ocelot joined the first one, followed by a puma cub. "I went to look at him, and there was this tiny creature with sapphire blue eyes staring up at me, alternately crying and purring," recalls Berens.  When the young puma joined the two ocelots, Panther Ridge was born.

Although visitors cannot leave Panther Ridge with a pet, they are encouraged to "adopt" a cat online. For a nominal fee, the adoption packet includes a biography of their chosen cat, an adoption certificate and an 8x10 photo. With receipt of their packet, the guest can visit "their" cat when not at Panther Ridge.

Follow the Panther Ridge community on Facebook and Instagram where entertaining videos of the cats in their habitats can be found. The Center sends monthly newsletters including information on the cats and upcoming events such as Twilight Tours and their annual fundraiser, A Walk on the Wild Side, on February 20th, 2020.

For more information on Panther Ridge Conservation Center or to book a tour, visit www.pantherridgecc.org or call 561-795-8914.