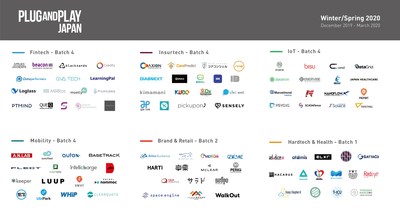 This Winter/Spring 2020 Batch will include startups accepted in Plug and Play's new program in Kyoto focused on Hardtech & Health.

The ratio of domestic / overseas startups selected this batch was 52% in Japan (49 companies) and 48% overseas (45 companies).

At this year's Japan Summit, held at the Toranomon Hills Forum on September 18th and 19th, 61 selected startups shared their experiences from the program. 2,004 attendees were present at the two day event.

Plug and Play Japan will hold its Winter/Spring 2020 Summit on March 5th (Thu) and 6th (Fri) in Tokyo. On March 17th (Tue) in Kyoto the new partners and startups will discuss the highlights from the first program.