CHAMPIONSGATE, Fla., Nov. 20, 2019 /PRNewswire/ -- While periodontal disease is accepted by the medical community for its links to cardiovascular problems and diabetes, the connection between other dental conditions and whole body health have yet to be extensively recognized.  The International Academy of Oral Medicine and Toxicology (IAOMT) hopes to change that with its new integrative health podcast series Word of Mouth. 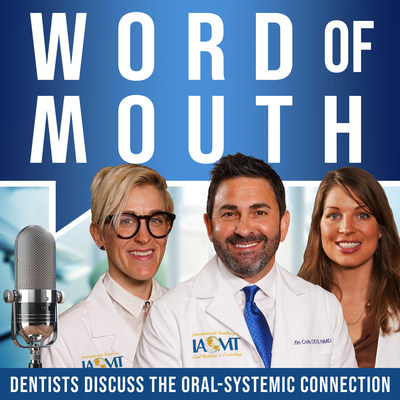 "The podcast series we're launching today has a unique focus on the relationship between oral health and overall health, which is also known as the oral-systemic connection," explains IAOMT President Carl McMillan, DMD. "All too often, dentistry is excluded from medical care, resulting in a disconnect between the treatment of the mouth and treatment of the rest of the body. This is dangerous because oral health conditions have been scientifically associated with a wide range of systemic illnesses. We're using our podcast series to raise awareness of this issue and improve public health."

In the first episode of Word of Mouth, IAOMT member and past president, Griffin Cole, DDS, NMD, interviews Dave Warwick, DDS, about his new study evaluating the levels of mercury emitted from dental drilling on amalgam fillings.  They discuss the risks associated with mercury exposure for dental professionals who routinely perform work on amalgam fillings and for patients who have these silver-colored fillings in their mouths.

The additional episodes of the Word of Mouth podcast being released today explore two other major talking points relevant to integrative health. In the second episode, IAOMT member and past president, Griffin Cole, DDS, NMD, interviews Val Kanter, DMD, MS, BCNP, IBDM, about regenerative endodontics and the burgeoning controversy over root canals. The third episode features IAOMT member and past president, Mark Wisniewski, DDS, interviewing Boyd Haley, PhD, about the role of oxidative stress in disease and the ability for heavy metal detoxification to reduce oxidative stress and promote healing.

Future episodes of Word of Mouth are already in production, and the IAOMT expects the podcast to be a long-running series that will forge a more integrated approach to dental and medical care. "What happens in the mouth impacts the rest of the body and vice-versa," IAOMT President McMillan reiterates. "Patients can clearly benefit from an integrative approach to treating the health of their whole body. Our Word of Mouth podcast will spread this important message."

The IAOMT is a global network of health professionals who research the oral-systemic connection and educate about the biocompatibility of dental products and practices. This includes assessing risks of mercury fillings, fluoride, root canals, and jawbone osteonecrosis. The IAOMT is a non-profit organization and has been dedicated to protecting public health and the environment since it was founded in 1984.