BOSTON, Nov. 19, 2019 /PRNewswire/ -- Today, Samuel Adams, one of the leading independent, American brewer that pioneered the craft beer revolution, introduces "Toast Someone," tapping America's leading comics to encourage drinkers everywhere to share their appreciation for someone who has made a meaningful impact on their life by raising a toast. Sam Adams is kicking off the campaign with a message to drinkers that there is no better time than now to toast someone. Watch the anthem video at SamuelAdams.com.

As a brand that has been bringing people together for over 30 years with its flagship beer, Samuel Adams Boston Lager, Sam Adams saw an opportunity to help drinkers reflect on and celebrate what matters most this holiday season: each other and the moments in life we share together.

The action of expressing gratitude has a positive impact on both the giver and receiver, but people are likely not doing it nearly as much as they should in their daily lives. A recent survey of over 2,000 U.S. adults age 18+ conducted online by The Harris Poll on behalf of Sam Adams1 found that the majority of Americans (84%) agree that people do not express their appreciation for others as often as they should?and that nearly two-thirds of Americans (64%) have had trouble expressing their appreciation for someone. That's when Sam Adams stepped in, realizing drinkers need to take action and give thanks to others in a simple, yet meaningful way.

The same survey found, roughly six in ten Americans (58%) are more likely to express appreciation for others during the holiday season than other times of the year, so Sam Adams set out to inspire more drinkers to Toast Someone when gratitude is top of mind.

Sam Adams believes that the simple gesture of physically toasting someone can have a real impact and questions why we're not doing more of it. With no beer more dignified to be at the center of a meaningful toast than Boston Lager, Sam Adams decided to eliminate the awkwardness that comes with giving recognition this holiday season.

To inspire drinkers and demonstrate the power of a toast, Samuel Adams asked some of the country's most popular comedians?Whitney Cummings, Brendan Schaub, Theo Von, Ari Shaffir, Tom Segura and Jo Koy to shed their bravado and sincerely thank someone with a toast, not a roast. Watch their individual toasts here.

How to Toast Someone
How can you join Samuel Adams and raise a glass? Start by visiting SamuelAdams.com and get inspired by others' stories. Then, follow these steps:

As part of the campaign launch, Sam Adams has also created a limited-edition Toast Someone two-pack carrier that fits two Boston Lagers and includes space for a written sentiment, because 49% of survey respondents stated that feeling awkward was the biggest barrier to expressing appreciation and we recognize a small prompt go a long way. The Toast Someone two-pack carriers will be available free of charge with any Sam Adams purchase starting this week at select retailers nationwide and will be available while supplies last.

Founder & Brewer Jim Koch on Toast Someone
"I'm grateful for so many people who have helped me along the way and for having the opportunity to help others. We could all use a little more positivity, and there is no better time than now to start a chain reaction of gratitude. Making a simple and sentimental toast with a quality beer like Boston Lager is a small gesture that goes a long way. And at the very least, it gives you something to do with your hands for when expressing your appreciation can feel a little awkward."

Samuel Adams Toasts to Entrepreneurs This Year
This year, Sam Adams is raising a beer to small businesses like the 2019 Samuel Adams Brewing the American Dream Boston grant recipient, Heather Yunger CEO and founder of Top Shelf Cookies of Dorchester, Massachusetts. Brewing the American Dream is a community effort in partnership with Accion, the nation's largest nonprofit small business lending network, to support food and beverage entrepreneurs and help them grow their businesses.

To continue the spirit of giving this season, purchases of specially marked Sam Adams Boston Lager will support the brand's priority philanthropy program, Brewing the American Dream, with a $0.50 donation, per pack and pint, this November and December, up to $250,0002. The Give Back 12-Pack and Give Back On Tap will fuel food and beverage entrepreneurs through necessary grants and funding in 2020.

About Samuel Adams
Samuel Adams is a leading independent, American craft brewer that helped to launch the craft beer revolution.  The brewery began in 1984 when Founder and Brewer Jim Koch used a generations-old family recipe to brew beer in his kitchen. Inspired and unafraid to challenge conventional thinking about beer, Jim brought the recipe to life with hopes drinkers would appreciate the complex, full-flavor and started sampling the beer in Boston.  He named the flagship brew Samuel Adams Boston Lager in recognition of one of our nation's founding fathers, a revolutionary man of independent and pioneering spirit.  Today, Samuel Adams is one of the world's most awarded breweries and remains focused on crafting the highest quality beers through innovation and experimentation in the relentless pursuit of better.  Samuel Adams remains dedicated to elevating and growing the American craft beer industry overall, including providing education and support for entrepreneurs and fellow brewers through its philanthropic program, Brewing the American Dream, which helps others pursue their American Dream.  For more information, visit www.SamuelAdams.com.

1Survey Method
This survey was conducted online within the United States by The Harris Poll on behalf of Samuel Adams from November 7-11, 2019 among 2,012 U.S. adults ages 18 and older. This online survey is not based on a probability sample and therefore no estimate of theoretical sampling error can be calculated. For complete survey methodology, including weighting variables and subgroup sample sizes, please contact brittany.zahoruiko@BostonBeer.com

2The Boston Beer Company will donate $0.50 from every 12-pack or pint glass sold of Samuel Adams Boston Lager to Accion US Network at participating locations during the months of November and December.*

Donations are from The Boston Beer Company to Accion US Network (501C3). For more information on Accion US Network, please visit https://us.accion.org/resource/brewing-the-american-dream/. Maximum donation $250,000. Offer valid only at participating locations displaying this offer between November 1 ? December 31, 2019. Void where prohibited by law.

The program was registered in all MA, MS, SC, IL, HI and AL. 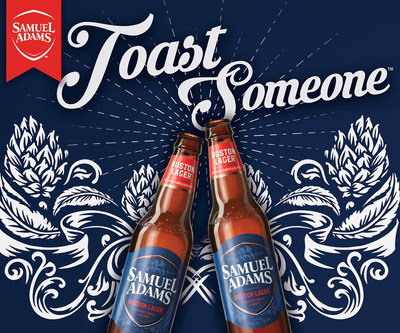