CHICAGO, Nov. 19, 2019 /PRNewswire/ -- Get ready to bring the house down, as mike's HARDER rolls deep with chart topping hip-hop trio, Migos. Together, they launch a contest in search of two fans primed to go HARDER and walk it like they talk it.

Beginning November 19th* through December 31st, fans can enter the contest for their chance to be bad and boujee for a night, with an epic, trip for two, to go HARDER like Migos. In the end, two lucky winners will get to celebrate like ? and with ? the famously lavish moguls, complete with a $20,000 stack**, HARDER bling, dope accommodations and a luxury whip to transport them to a professional basketball game with the full Migos crew. ?

"Migos are wild, unexpected and a whole lot of fun. This makes for a great collaboration with HARDER's fearless and go-bolder mentality. They both work hard, and go even HARDER, setting a perfect tone for this partnership," said Sanjiv Gajiwala, senior vice president of marketing, Mike's Hard Lemonade.

"Stacks, ice and drip. We get wit mike's HARDER. You get with us." -Migos

Enter the contest by following @HARDER on Twitter and sharing how you want to celebrate like Migos via your public profile using #DudeThatsMigos and #contest. As an alternative to Twitter, fans can enter by visiting www.dudethatsmigos.com. The contest concludes at 11:59 pm ET on December 31, 2019, and winners will be announced in early 2020.

HARDER is the premium flavored malt beverage brand that is obsessed with quality and crafting the best tasting hard lemonades. With an 8% ABV, intensely refreshing taste and unique flavors, HARDER fuels the transition to what's next. The brand's ten bold, great-tasting flavors come in 16oz and 23.5oz cans, as well as a variety pack, and can be found at www.mikesharder.com/#locator.

About Migos
Grammy-nominated multi-platinum trio, Migos, are one of the most influential groups in modern music. Having a seismic impact on the music world with their seminal album, the RIAA Certified Platinum album CULTURE which debuted at number 1 on the Billboard Charts. Migos released their second consecutive #1 album on Billboard's Top 200 Chart 'CULTURE II' in January of 2018. The album has since been streamed over 1 billion times and is RIAA Certified Platinum. Their blockbuster single "MotorSport," featuring Nicki Minaj and Cardi B, earned Double Platinum status in Canada, and RIAA Certified Platinum status in the US.  CULTURE II opened at #1 on Billboard's Top 200 Chart with 150,000 streaming units sold, 38,000 traditional sales and 11,000 track equivalent sales marking their second consecutive number one album and amassing 225.6 million streams in its first week. The monumental feat earned eight songs from the album Top 10 positions on Spotify on the day it was released in addition to debuting at #1 in 62 countries on Apple Music achieving one of the largest debut weeks in the music platform's history as the trio's smashing success on streaming services continues to soar. Their second single, "Stir Fry," produced by Pharrell Williams, was the official song for NBA's All-Star weekend. The  group has performed on Saturday Night Live, The Tonight Show Starring Jimmy Fallon, graced the cover of Rolling Stone among others, broke the internet with their Carpool Karaoke appearance on James Corden, and were nominated for Best Rap Album and Best Rap Performance at the 2018 Grammy Awards.

*For AL, MD, NJ, PA & WV, contest starts November 25th.
**"Stack" awarded as a check.
?Participation of Migos subject to availability and other restrictions. NO PURCHASE NECESSARY. Open only to legal U.S. residents, 21 years or older. Subject to Official Rules at www.dudethatsmigos.com. 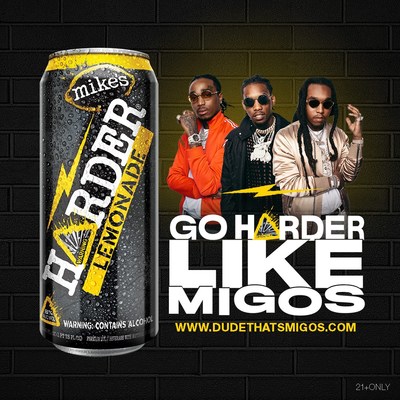