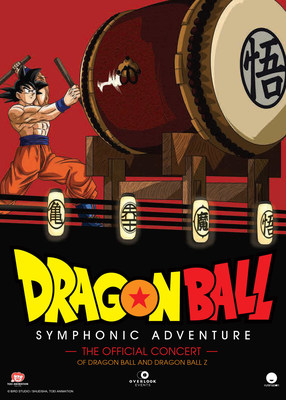 Based on its Narrative Symphonic Experience concept, Overlook Events mixes a symphony orchestra with rock instruments, live vocals, sound effects and light synchronized to a compilation of Dragon Ball video excerpts projected on giant screens, following a strict narrative ? to create the "Dragon Ball Symphonic Adventure." The result is a concert experience that achieves a musical and technical mastery still very rare in an industry dominated by cinema-concerts.

Overlook describes their creative process: "As great enthusiasts of Akira Toriyama's saga, we spent long months carefully selecting and analyzing each scene to draw out the essence of the Dragon Ball story. While reconstructing each arc, each scene was thoughtfully set to new orchestrations of the classic music, to align with our Narrative Symphonic Experience concept. Nothing was left to chance. Now, we invite you to enjoy every minute of this concert experience, from the opening trumpet notes heralding the first transformation of Son Goku, ready to unleash his uncontrollable fury against the mighty Frieza."

Tickets for the premiere performance of "Dragon Ball Symphonic Adventure" will go on sale at 10am CST on November 15, 2019 via Ticketmaster at http://bit.ly/DBSymphonicAdventure.

About Funimation
Funimation, a subsidiary of Sony Pictures Television, is a global leader in the world of anime. A fully integrated, next-generation entertainment studio, the company's fan-first philosophy is anchored in its omnichannel approach to its immersive offerings. From streaming and home entertainment to theatrical distribution and broadcast, Funimation's commitment to character-driven storytelling, combined with tech innovation and key distribution partnerships, provides audiences with multiple and meaningful touchpoints to connect with this immersive world. FunimationNow, a next generation streaming service, provides subscribers with instant access to their favorite sub and dub shows in ad-free HD on the widest array of platforms ? including smartphones, tablets, TVs and gaming consoles. Funimation Films, the theatrical division of Funimation, acquires and distributes both anime and live action movies from prominent international filmmakers that appeal to the interests and passion of all types of fans. For more information about Funimation, visit funimation.com.

About Overlook Events
Founded by four entrepreneurs from the industries of imagination, the France based company Overlook Events seeks to be the receptacle for all ideas that combine the creativity of talented artists with the need to offer new and original experiences to enthusiasts, both in their conception and in their representation, exploring the many possibilities of transcending a work, a license or an artist into unique stage performances. In 2017, the concept of Narrative Symphonic Experience is initiated with the global creation of Dragon Ball Symphonic Adventure, which allowed the elaboration of an event of the greatest artistic and technical development quality, followed by Saint Seiya Symphonic Adventure under the same concept and many others to be announced. Thanks to their huge combined experience in the organization of events, the concerts of Overlook Events, and their internationally recognized quality signature, are now being exported worldwide.

About AWR Music Productions
AWR Music Productions (the producers of Distant Worlds: music from FINAL FANTASY and A New World: intimate music from FINAL FANTASY) is a multi-dimensional musical services and production company, providing excellence in live performance, recorded media, content development and creation, performance production and support. AWR Music Productions delivers every aspect of the live concert production, from musician hiring to research and development to performance, from technical and logistical expertise to social media and niche marketing, from original music and the creation of arrangements and orchestrations to all aspects of record production.