POWERLINE IS ENERGIZED AND HOT COMMISSIONING IS UNDERWAY

"I want to congratulate our team on achieving two major project milestones: hot commissioning of the process plant is underway and the recent energization of the powerline.  Significant progress was also made on the tailings dam," said Ron Hochstein, Lundin Gold's President and CEO.  "The mine contractor completed the two declines and demobilized during the quarter, and operations have now fully transitioned to owners' teams.  By the end of this year Lundin Gold will transition from a developer to a producer."

Development continues ahead of projections and as at September 30, 2019 a total of over 10.5 kilometres ("km") of underground mine development had been completed, of which 2,500 metres was completed during the quarter.  The mine contractor completed its scope of work and was demobilized by the end of the quarter.  The pilot hole for the South Vent Shaft was completed and raise boring of the ventilation raise began in September.

Overall construction progress was 89% complete.  Construction is nearing completion in most areas with some work on tailings, the main water treatment plant and paste plant on target for completion later this year.

Process plant wet commissioning started early in the third quarter, and hot commissioning began towards the end of the quarter with first ore put through the grinding mills on September 27, 2019.  Reagents fills and operations consumables started arriving at site and laboratory operations also began.

Hiring for operations continued to progress on plan with less than 100 positions open at quarter end, with the majority expected to be filled from existing Project staff.

As at quarter end all significant ancillary facilities were completed.  The on-site electrical distribution network was substantially completed and the main Fruta del Norte power substation and emergency power generation systems were completed.

Remediation work was well under way on the North Access Road during the third quarter and was re-opened to traffic in November 2019.

Construction of the 42 km powerline and Bomboiza substation work was completed and tested during the quarter.  The powerline was energized in early October and Fruta del Norte is now connected to Ecuador's national power grid.

The total recordable incident rate for the Project at the end of the quarter was 0.54 per 200,000 hours worked.  There was only one medical incident and no lost time injuries were recorded during the quarter.

Efforts to finalize the Administrative Act and Industrial Water Permits required for operations from La Secretaría Nacional del Agua (SENAGUA) continued and these permits are expected to be received shortly.

As of quarter end, the Company estimates that 46% of its employees and 45% of all workers, including contractors, were from the Zamora Chinchipe province.

Lundin Gold's procurement programs resulted in the purchase of approximately $2.5 million per month in goods and services from the local communities during the quarter.

During the quarter, the Company held community presentations in accordance with the Awareness and Preparedness for Emergencies at the Local Level (APELL) process relating to the transportation of cyanide.

More detailed mapping and sampling also occurred at the Jabali target south of the Basin. Epithermal gold-silver vein float has previously been located in the target area, but a significant in-situ source of this material has not been identified.

Permitting in preparation for scout drill testing continues with a plan to mobilize drill rigs to the Barbasco epithermal gold-silver target as soon as the permits are received.

The Company did not repay or increase its gold prepay and stream credit facilities during the nine months ended September 30, 2019.  The variation in the amount of these debt obligations is due to a change in their estimated fair values as they are accounted for as financial liabilities measured at fair value.  This variation is recorded as a derivative gain or loss in the applicable period.  The fair values calculated under the Company's accounting policies are based on numerous estimates as of the balance sheet date and are, therefore, subject to further future variations until the debt obligations will actually be repaid by the Company.

Two key drivers of current fair values are gold and silver prices because future repayments under the gold prepay and stream credit facilities are based on forward gold and silver price estimates at time of repayment.  During periods of increasing gold and silver prices as in the nine months ended September 30, 2019, their forecast forward prices will also generally increase. This results in a higher estimated fair value of the debt obligations at the current balance sheet date and the recognition of derivative losses, although it does not necessarily reflect the amounts that will actually be repaid when the obligations become due in the future. It should also be noted that the potentially more significant impact of the same change in forward gold and silver prices on the value of future production and revenues forecast to be generated during the same periods when the debt obligations will be repaid cannot be recognized because of the inherent uncertainty and risks associated with actually realizing such production and sales.

Other than the effect of derivative losses, the remainder of the Company's net loss is made up of exploration and general and administrative expenses which includes professional fees incurred for the maintenance of the senior debt facility and training costs as training for operations are well underway.

As at September 30, 2019, the Company had cash of $130.2 million and a working capital of $124.6 million compared to cash of $167.5 million and a working capital balance of $153.2 million at December 31, 2018.  The change in cash was due to costs incurred for the development of the Project of $320.9 million, general and administration costs of $16.0 million and exploration expenditures of $2.4 million.  This is offset by drawdowns from the senior secured project finance debt facility (the "Facility") totalling $301.0 million, which will be used to fund the construction of the Project, and net proceeds of $33.9 million from an equity financing in March 2019.  In addition, the Company received proceeds of $2.4 million from the exercise of stock options and $1.6 million for the issuance of shares and warrants  to Newcrest under the anti-dilution rights related to its 27.3% shareholding in the Company.

As at September 30, 2019, the Company has $49 million remaining under the Facility available to be drawn at its option. In addition, at the end of March the Company entered into a $75 million cost overrun facility which is available once the Facility is fully drawn and can be used to fund a potential cost overrun related to the development of the Fruta del Norte Project.  The Company expects the current cash balance and existing debt facilities to be sufficient to complete the development of the Project.

The technical information relating to the Fruta del Norte Project contained in this News  Release has been reviewed and approved by Ron Hochstein P. Eng, Lundin Gold's President and CEO who is a Qualified Person under NI 43-101. The disclosure of exploration information contained in this News Release was prepared by Stephen Leary, MAusIMM CP(Geo), a consultant to the Company, who is a Qualified Person in accordance with the requirements of NI 43-101.

The Company's consolidated financial statements for the three and nine months ended September 30, 2019 and related management's discussion and analysis are available on the Company's website at www.lundingold.com or under its profile on SEDAR at www.sedar.com.

The information in this release is subject to the disclosure requirements of Lundin Gold under the EU Market Abuse Regulation. This information was submitted for publication November 8, 2019 at 2:30 p.m. PT through the contact persons set out below.

Lundin Gold, headquartered in Vancouver, Canada, is developing its wholly-owned Fruta del Norte gold project in southeast Ecuador. Fruta del Norte is one of the world's largest, highest-grade gold projects currently under construction. The Company's board and management team have extensive expertise in mine construction and operations, and are dedicated to advancing this project through to first gold production in the fourth quarter of this year.

The Company operates with transparency and in accordance with international best practices. Lundin Gold is committed to delivering value to its shareholders, while simultaneously providing economic and social benefits to impacted communities, fostering a healthy and safe workplace and minimizing the environmental impact. The Company believes that the value created through the development of Fruta del Norte will benefit its shareholders, the Government and the citizens of Ecuador.

Caution Regarding Forward-Looking Information and Statements
Certain of the information and statements in this press release are considered "forward-looking information" or "forward-looking statements" as those terms are defined under Canadian securities laws (collectively referred to as "forward-looking statements").  Any statements that express or involve discussions with respect to predictions, expectations, beliefs, plans, projections, objectives, assumptions or future events or performance (often, but not always, identified by words or phrases such as "believes", "anticipates", "expects", "is expected", "scheduled", "estimates", "pending", "intends", "plans", "forecasts", "targets", or "hopes", or variations of such words and phrases or statements that certain actions, events or results "may", "could", "would", "will", "should" "might", "will be taken", or "occur" and similar expressions) are not statements of historical fact and may be forward-looking statements.

This press release contains forward-looking information in a number of places, such as in statements pertaining to: the timing of first gold and commercial production and the progress of the development, construction and operation of the Project, improvements to site logistics and completion of site and powerline infrastructure, the Company's exploration plans and activities, the timing and success of permitting and regulatory approvals,  project financing and future sources of liquidity, capital expenditures and requirements, future tax payments and rates, cash flows and their uses.

There can be no assurance that such statements will prove to be accurate, as Lundin Gold's actual results and future events could differ materially from those anticipated in this forward-looking information as a result of the factors discussed in the "Risk Factors" section in Lundin Gold's Annual Information Form dated March 27, 2019, which is available at www.lundingold.com or on SEDAR.

Lundin Gold's actual results could differ materially from those anticipated.  Factors that could cause actual results to differ materially from any forward-looking statement or that could have a material impact on the Company or the trading price of its shares, include: receipt of regulatory approvals, risks associated with the Company's community relationships; risks and hazards inherent in mining and processing; lack of availability of or interference with infrastructure; risks related to Lundin Gold's compliance with increasingly strict environmental laws and liability for environmental contamination; risks related political and economic instability in Ecuador; deficient or vulnerable title to mining concessions and surface rights; risk to shareholders of dilution from future equity financings;  failure to maintain its obligations under its debt facilities; shortages of critical resources, such as skilled labour and supplies, consumables and equipment; inherent safety hazards and risk to the health and safety of the Company's employees and contractors;  volatility in the price of gold; the cost of compliance or failure to comply with applicable laws; the timely receipt of regulatory approvals, permits and licenses;  risks associated with the performance of the Company's contractors;  the imprecision of Mineral Reserve and Resource estimates; dependence on key personnel; volatility in the market price of the Company's shares; the potential influence of the Company's largest shareholders; uncertainty with the tax regime in Ecuador; measures required to protect endangered species; exploration and development risks; the Company's reliance on one project risks related to artisanal and illegal mining; the reliance of the Company on its information systems and the risk of cyber-attacks on those systems; the ability to obtain adequate insurance; uncertainty as to reclamation and decommissioning; the uncertainty regarding risks posed by climate change; the ability of Lundin Gold to ensure compliance with anti-bribery and anti- corruption laws; the potential for litigation; and limits of disclosure and internal controls.

Figure 2. Portal platform as at September 2019

Figure 3. Process plant as at September 2019 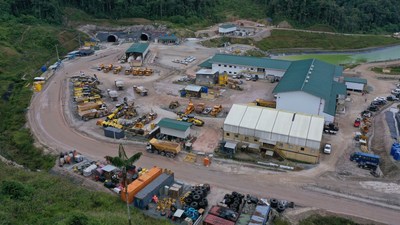 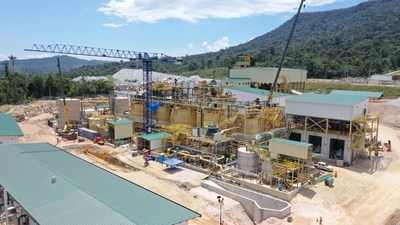