VANCOUVER, Oct. 31, 2019 /CNW/ - Vancouver lawyer Carey Linde accuses gender identity social justice warriors of labeling any statement  they disagree with as offensive "hate speech" and the author as irredeemably "transphobic." He argues their collective obsession to have their sensitivities protected from so called "hate speech" more than justifies denying the author any platform to speak, and attack anyone providing the platform. 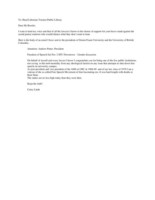 Linde claims this is the ideology that fuels the demonstrations on the last bastions of public free speech: libraries and universities. He sent emails to librarian Vickery Bowles of the Toronto Public Library and the president of Simon Fraser University congratulating them for being the remaining public institutions resisting the onslaught to stifle freedom of speech. He regards today's insidious threat to free speech to be greater than it was during his university years in the Free Speech Movement of the late 1960s.

Linde said he expects an intentionally disruptive demonstration similar to the Oct 29th at the Toronto Public Library to confront the same feminist speakers at the SFU campus downtown Vancouver Nov 2 evening event.

The Law Offices of Carey Linde

Carey Linde has been practising law for 39 years. He raised his family in the  Haida Village of Skidegate on Haida Gwaii. He was a member of Vancouver M.E.N., a past member of Seattle M.E.N., and a participant in a men's groups, former member of the board of Vancouver Community College and Vancouver Community Legal Assistance Society. He obtained his B.A. in psychology and law degree from the University of British Columbia, where he was the president and vice president of the student body and president of his graduating class in law school 1968 to 1970.

He is a strong advocate for consensus over conflict. But he won't avoid the just fight when reason fails. He was a member of the Trial Lawyers' Association of British Columbia and a past member of the American Trial Lawyers' Association. Carey Linde pioneered the movement for equal-time shared parenting in the courts of Canada. His practice is aimed at ensuring children can keep both parents meaningfully in their lives.