SANTA ELENA, Petén, Guatemala, Oct. 26, 2019 /PRNewswire/ -- A proposal to build a Disney-like theme park in the Maya Biosphere Reserve in northern Guatemala is under fire from a coalition of forestry and conservation groups as well as Mayan archaeologists. 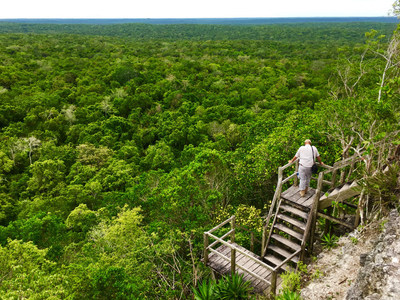 The jungle theme park is the brainchild of Dr. Richard D. Hansen, an archaeologist from Rupert, Idaho, and director of the El Mirador Archaeological Project in the reserve.

Though the plan has not been made available to the public, Maya Biosphere Watch reports that a 2018 executive summary documented plans for multiple hotels and a train that would traverse the rainforest, linking nine archaeological sites.

Clipston said forestry workers, archaeologists, and conservation groups in the area opposes the plan. The group believes the theme park would disrupt conservation efforts by forestry concessions and displace thousands of local residents, many of whom are descended from the ancient Maya, she said.

A full report on the controversy is available at www.MayaBiosphereWatch.com, Clipston said.

Hansen has hired a lobbying firm to seek out government assistance in Washington to raise the more than $100 million dollars for the project. Hansen has worked in the area for decades and has pursued this vision for at least 20 years. He believes it will be the salvation of the region, preventing deforestation, drug trafficking and halting migration to the U.S.

But opposition to the plan is growing, according to Maya Biosphere Watch.

Conservation groups say the reserve is not in any immediate danger and insist that removing national parks and forest concessions would threaten the fragile rainforest environment.  They point to a 2017 report by Consejo Nacional de Áreas Protegidas, a government agency, that shows a net gain in the amount of forest within the Eastern MBR over recent years.

"Like most people," Clipston said. "I was lured into the idea of this proposal being beneficial to the people and the forest, but after further investigation I was disheartened."

Dr. Tomas Barrientos, codirector of La Corona Archaeological Project in the MBR, says "The role that local communities have played in the preservation of nature must be taken into consideration."

Dr. Francisco Estrada-Belli, a Guatemalan archaeologist and director of the Holmul Archaeological Project, openly voices his disapproval. "It concerns me that those outside the academic community who currently support Hansen's project genuinely believe he is working to benefit Guatemala, while the plan appears to be more about him having control of a large portion of the country than about benefitting Guatemala or science."

Roan Balas McNab, program director of Wildlife Conservation Society in Guatemala, says Hansen's plan would "undermine the social fabric of the eastern Maya Biosphere Reserve, one of the few Mesoamerican wilderness areas that is actually increasing in size."

"Our call to Guatemalans, Mexicans, and the U.S. supporters alike is that they take a step back, debate the merits and challenges inherent in this proposal, and at all costs avoid a rush to judgement."

Maya Biosphere Watch is a grassroots community non-profit organization concerned with environmental protection of the rainforest.